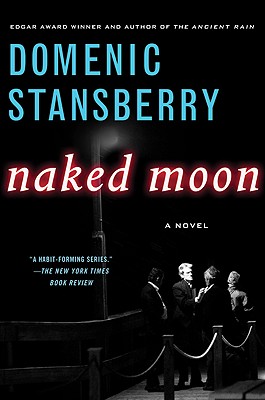 Set in San Francisco in the crumbling vestiges of Italian North Beach, Domenic Stansberry’s latest novel plunges once again into the noir underworld of Dante Mancuso. This new installment of Stansberry’s critically acclaimed series, Naked Moon, unearths a past Mancuso had hoped to escape. Before becoming a private investigator, Dante worked for a secret corporate security firm---known simply as the company---that prized effectiveness over legality. When Dante left, it was not on good terms. So he made sure to take enough inside information to keep himself safe from reprisal.

Dante, however, has his own secrets; for example, he doesn’t ask his cousin Gary questions about how he keeps the family warehousing business---the one where Dante is a silent partner---in the black, while everyone else’s has failed. When SFPD Detective Leanora Chin starts asking questions, Gary turns to the company for help, which they’re willing to provide, so long as Dante agrees to settle his past debts by doing them one last favor: the type of favor that could drag him under for good.

Edgar Award winner Domenic Stansberry is one of the most talented crime novelists working today. His novels are dark, lyrical, and widely acclaimed, and Naked Moon is no exception as it captures the sense of dread, paranoia, and quiet despair that cling to a man and a part of a city living on borrowed time.

“What makes Stansberry stand out from the crowd is the genuine noir sensibility he brings to his work, the overwhelming feeling that things must go wrong. The last paragraph . . . captures the core of Stansberry’s view perfectly, its eloquence suggesting Joyce describing the snow at the end of his celebrated story ‘The Dead.’”
---Booklist (starred review and one of Booklist’s Top Ten Crime Novels of the Year) on The Ancient Rain

“Another fine book by the Edgar Award winner . . . Stansberry is mining a unique terrain.”
---San Francisco Chronicle on The Ancient Rain

“True to the aching regret, something terrible does happen. But it is only one of several hollowed-out moments in this brilliantly sad book. Going for set-piece gems . . . the narrative summons up a once-rich North Beach culture now reduced.”
---The Houston Chronicle on The Ancient Rain

“A hypnotic, compelling read. It’s one part Sopranos, another part Greek tragedy.”
---The Boston Globe on The Big Boom

DOMENIC STANSBERRY's previous novels include "The Confession," an Edgar Award winner; "The Last Days of Il Duce," an Edgar Award and Hammett Prize finalist; and most recently, "The Ancient Rain," a Shamus Award Finalist. He lives with his family in the San Francisco Bay area.
Loading...
or
Not Currently Available for Direct Purchase