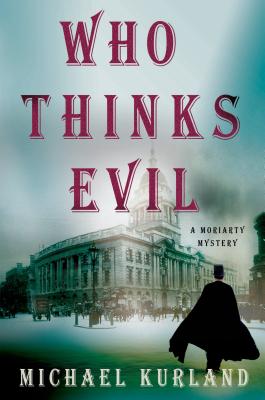 In London, 1892, a well-guarded young nobleman goes missing under distressing circumstances. The nobleman, one Baron Renfrew, is actually Prince Albert Victor, eldest grandson of Queen Victoria. He disappeared while he was visiting a house of ill repute, with bodyguards both inside and outside the building with his inside bodyguard rendered unconscious and the trussed-up corpse of a brutally murdered young woman left behind. Hoping to find the missing Prince and to clear him of the murder, the royal family is looking for a brilliant and, more importantly, discreet investigator. Sherlock Holmes, alas, is out of the country so, at the suggestion of his brother Mycroft, they turn to the only man who just might be more brilliant Dr. James Moriarty.

Moriarty, at the time, is up on charges of murder, awaiting retrial after his first jury was hung. In exchange for his release and the murder charges (of which he's innocent), the so-called "Napoleon of Crime" will use all his resources to track down the missing prince and find out who is behind his disappearance and the brutal murders left in his wake. He soon finds that someone out there is laying a trail, setting up Moriarty himself to take the fall for the crimes. If the real Moriarty doesn't manage to unravel and foil this plot soon, he may never again draw another free breath.

"Who Thinks Evil "is the fifth Professor Moriarty novel from Michael Kurland.


Praise For Who Thinks Evil…

“Michael Kurland has made Moriarty more interesting than Doyle ever made Holmes.” —Isaac Asimov on The Infernal Device

“Deliciously complex and abundantly rewarding . . . uncommon are the pleasures such writing affords.” —Publishers Weekly (starred) on The Great Game

“The diabolical (and misunderstood) criminal genius turns sleuth to clear his name . . . there’ll be much eyebrow raising and Victorian drollery before the satisfactory solution.” —Kirkus Reviews on The Empress of India

“Wit, humor, plausibility, and interesting characters in an involved and involving plot.  Whether or not you savor the canon, you might want to venture into Moriarty territory.” –Mystery News

MICHAEL KURLAND is the author of more than thirty novels, but is best known for his Edgar-nominated mystery series featuring Professor Moriarty, including The Infernal Device and The Great Game.
Loading...
or
Not Currently Available for Direct Purchase