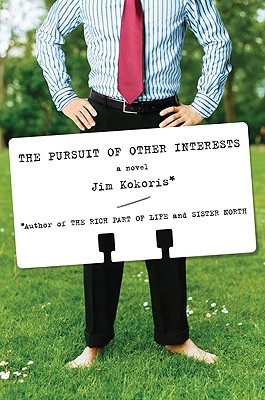 The Pursuit of Other Interests

“The Pursuit of Other Interests is a funny, often cynical, look at down-on-their luck former CEOs and the their job placement mentors. While Kokoris' moral is a common one, his book is a thoroughly enjoyable read.”
— Mary Cowen, Anderson's Bookshop, Naperville, IL
View the List

Charlie Baker is a neurotic but charming 50-year-old workaholic CEO of a major Chicago ad agency who seems to have it all: an impressive house in an upscale suburb, an equally impressive salary, the requisite pretty wife and accomplished son. All of this comes crashing down when Charlie is unceremoniously fired. In an instant, his life is transformed from corporate titan to just another out of work American.

For Charlie—an admitted workaholic—a world without a job is a strange world indeed. Rather then tell his family, every morning Charlie leaves home to spend his days at an outplacement firm, where he meets a cast of equally desperate corporate misfits. As Charlie reluctantly embarks on a journey of self-discovery, he finds out what happens when his work life is lost and his real life begins.

Humorous, poignant, and honest, The Pursuit of Other Interests offers a glimpse into the lives, hearts, and minds of the 21st-century American family.


Praise For The Pursuit of Other Interests…

“The Pursuit of Other Interests has the absurd hilarity of And Then We Came To The End coupled with the poignancy of Death of a Salesman. Compellingly readable. Utterly entertaining. Thought provoking. I was hooked by the first line and willingly pulled into the downward spiral of Charlie Baker’s life. He’s endearing and quirky in an embarrassingly real way. We are all Charlie, single-mindedly chasing after what we think we want, and then, when we get it, realizing we sped past the truly important things in life. Jim Kokoris absolutely nails the character of Charlie, with humor and pathos. I give it two thumbs up and five stars.”--Patricia Wood author of Lottery

Praise for The Rich Part of Life

"Watertight...so packed with zany Americana that you fear it might burst."--Los Angeles Times

"A cohesive and poignant story...Kokoris has an ear for how people talk and think."--Chicago Tribune

"Unexpected, hilarious, and more than worth the trip."- The New York Times Book Review

"Few novelists explore, much less capture, the religious imagination with the talent Jim Kokoris invests in these pages. Sister North is an impressive achievement."- Chicago Tribune

"A tender poignancy permeates this charmingly profound yet deviously humorous portrait of redemption and renewal."- Booklist

JIM KOKORIS's work has appeared in the "Chicago"" Tribune Sunday Magazine, USA Weekend, Chicago Sun-Times," and "Reader's Digest." He is the author of the novels "The Rich Part of Life," which has been published in 15 languages and for which he won a Friends of American Writers Award for Best First Novel, and "Sister North." A graduate of the University of Illinois, Jim lives with his wife and their three sons in the Chicago area.
Loading...
or
Not Currently Available for Direct Purchase