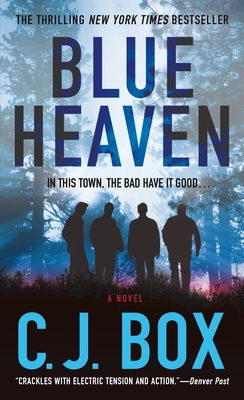 A twelve-year-old girl and her younger brother are on the run in the Idaho woods, pursued by four men they have just watched commit murder—four men who know exactly who William and Annie are. And where their mother lives.

Retired policemen from Los Angeles, the killers easily persuade the local sheriff to let them lead the search for the missing children. Now there's nowhere left for William and Annie to hide…and no one they can trust. Until they meet Jess Rawlins.

Rawlins, an old-school rancher, knows trouble when he sees it. He is only one against four men who will stop at nothing to silence their witnesses. But in this thrilling mystery novel from C.J. Box, these ex-cops don't know just how far Rawlins will go to protect William and Annie…and see that justice is done.

Praise For Blue Heaven: A Novel…

“A thriller with a heart.” —The Boston Globe

“One of the best thrillers of the year. It kept me up most of the night, the way few books have ever done. C.J. Box owes me a night's sleep!” —Tess Gerritsen

“A non-stop thrill ride--a provocative suspense novel that has you rooting for the characters every step of the way.” —Harlan Coben

“An unusual, intelligent thriller that resonates long after the last page is turned.” —George Pelecanos

“Relentless. C.J. Box sucked me in with good cops, bad cops, and missing money, then blind-sided me with unexpected twists and surprises in this novel of clashing cultures and dark secrets. Box delivers the goods!” —Robert Crais