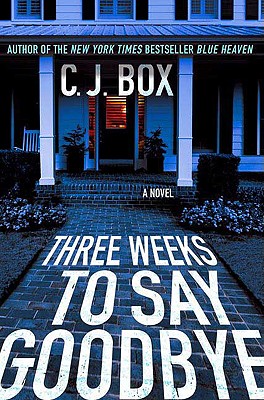 New York Times" bestselling author C.J. Box's novels have been called "red hot,"* "edge-of-your-seat read s],""+" and "unforgettable, powerful.""+" Now he delivers a novel that will steal your sleep as much as it will wrench your heart. It's a novel about something that could be anyone's worst nightmare. . . ."

Jack and Melissa McGuane have spent years trying to have a baby. Finally their dream has come true with the adoption of their daughter, Angelina. But nine months after bringing her home, they receive a devastating phone call from the adoption agency: Angelina's birth father, a teenager, never signed away his parental rights, and he wants her back. Worse, his father, a powerful Denver judge, wants him to own up to this responsibility and will use every advantage his position of power affords him to make sure it happens. When Jack and Melissa attempt to handle the situation rationally by meeting face-to-face with the father and son, it is immediately apparent that there's something sinister about both of them and that love for Angelina is not the motivation for their actions.

As Angelina's safety hangs in the balance, Jack and Melissa will stop at nothing to protect their child. A horrifying game of intimidation and double crosses begins that quickly becomes a death spiral where absolutely no one is safe.

"How far would you go to save someone you love?"

Bestseller Box (Blue Heaven) explores an adoptive parent’s worst nightmare in this compelling stand-alone thriller. Box’s convincing villains—gangsters, murderers, child pornographers—each provide a different face of evil, and each individual has to decide how best to get at the truth. As usual, Box blessedly reasserts that whatever the cost, such truth exists, and ordinary folk have the strength to find it. -- Publishers Weekly (starred review)

C.J. Box is the author of the bestselling "Blue Heaven" and of seven Joe Pickett novels. His novels have won the Anthony, Macavity, Gumshoe, and Barry Awards, as well as the French Prix Calibre .38. He has also been an Edgar Award and "Los Angeles Times" Book Prize finalist. His novel "Open Season" was a "New York Times" Notable Book. He lives outside Cheyenne, Wyoming, with his family.
Loading...
or
Not Currently Available for Direct Purchase