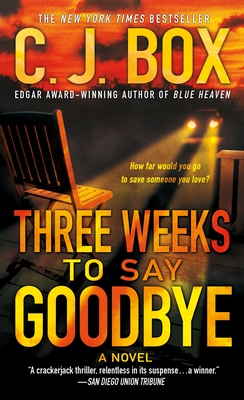 
Praise For Three Weeks to Say Goodbye: A Novel…

“Gut-wrenching…packs the kind of punch few thrillers, or novels of any kind, ever do.” —Providence Journal

“Frightening...Box understands the West and Westerners like no other writer.” —Rocky Mountain News

“Impossible to put down.” —Bookreporter.com

“Box has built a reputation for writing knife-edge suspense while incorporating solid social issues. And he does so again here…Tight writing, dead-on characterizations, and fierce action come together in the wrenching Three Weeks to Say Goodbye.” —Billings Gazette

“Three Weeks to Say Goodbye has all of the same ingredients that made [his other popular novels] hits.” —South Jersey News

C. J. Box is the author of over twenty Joe Pickett novels, as well as several stand-alone novels and a story collection. He has won the Edgar, Anthony, Macavity, Gumshoe, and Barry Awards, as well as the French Prix Calibre .38, and has been a Los Angeles Times Book Prize finalist. A Wyoming native, Box has also worked on a ranch and as a small-town newspaper reporter and editor. He lives with his wife on their ranch in Wyoming. His books have been translated into twenty-seven languages. He’s an executive producer of ABC TV’s Big Sky, which is based on his Cody Hoyt/Cassie Dewell novels, and executive producer of the Joe Pickett television series for Spectrum Originals.
Loading...
or support indie stores by buying on
(This book is on backorder)