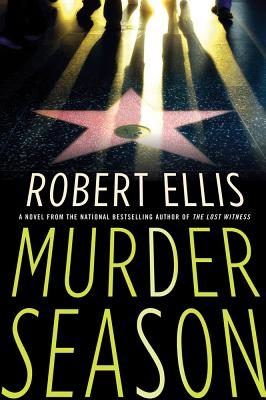 Detective Lena Gamble knows how to handle the hottest cases--do it fast and keep her head down. Because if it all goes south, the department won’t hesitate to make a scapegoat out of her. So when she gets called to the scene of a double murder at Club 3 AM, the latest A-list hangout for Hollywood celebs, she knows the fun is only beginning.

And she's not wrong. It's just much worse than she imagined. As expected, one of the victims is club owner Johnny Bosco, one of the most well-connected men in Hollywood politics. But the shocker comes when Lena sees the other victim: twenty-five-year-old Jacob Gant, acquitted just days ago of murdering his sixteen-year-old neighbor, after L.A.'s latest trial-of-the-century.

But are these victims of a father's righteous anger or is something bigger at play?

Robert Ellis delivers all the twists and turns fans have come to expect in this bestselling series with plenty to spare in Murder Season, his most outstanding white-knuckled thriller yet.

Praise for The Lost Witness

“The plot zigs and zags like a slalom course. . . .  Once you start The Lost Witness, you'll stay with it.”
--St. Louis Post-Dispatch

“Scorching… Ellis succeeds masterfully in both playing fair and pulling surprise after surprise in a story that feels like a runaway car plunging down a mountain road full of switchbacks.”
--Publishers Weekly (starred review)

Praise for City of Fire

“City of Fire is my kind of crime novel. Gritty, tight, and assured. Riding with Detective Lena Gamble through the hills of Los Angeles is something I could get used to. She’s tough, smart, and most of all, she’s real.”
--Michael Connelly

ROBERT ELLIS, a "Los Angeles Times "bestselling author, has written four previous novels, most recently The Lost Witness. A former filmmaker and political media consultant, he splits his time between Los Angeles and Connecticut.
Loading...
or
Not Currently Available for Direct Purchase