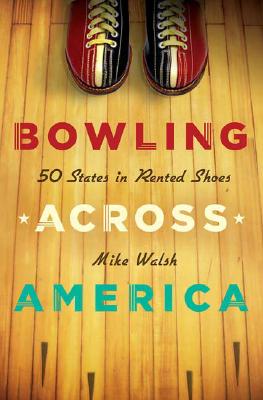 Inspired by his father’s unexpected passing, Mike Walsh, a 27 year-old Chicago advertising executive, quits his job to embark on a one-of-a-kind quest. The destination: bowling alleys in each of the 50 states. Though dubbed "career suicide" by colleagues, the endeavor soon touches a nerve among many people­—­from frustrated middle managers to radio talk show hosts to a woman who merely identifies herself as "Bowling Spice" in an innuendo-laden email.

Conversations and adventures with the people he finds in bowling alleys at all hours of the day and night—retired Maine lobstermen, saucy European nannies, recovering addicts, former bowling champions, college students, World War II vets and lingerie saleswomen, to name a few—combine to form a picture of what America looks like while standing in a pair of rented shoes.

Hilarious, insightful and at times moving, BOWLING ACROSS AMERICA is an epic journey that will enthrall readers everywhere.

MIKE WALSH is one of the world's leading authorities on the geographic nuances of rented footwear. A graduate of Miami University, he grew up in a family of six children in Upper Arlington, Ohio. He and his wife Amy reside in Chicago within walking distance of four bowling alleys.
or
Not Currently Available for Direct Purchase
Copyright © 2020 American Booksellers Association