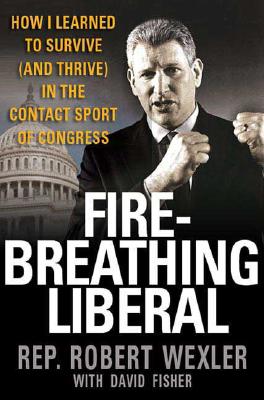 There’s a reason The Nation, America’s leading progressive magazine, named Robert Wexler the country’s “Most Valuable Congressman.” It's the same reason right-wing radio host Rush Limbaugh refers to him as “disgusting.” It's because for the last twelve years Wexler has been Congress’s most outspoken liberal -- taking on George W. Bush, Dick Cheney, Condoleezza Rice, Alberto Gonzales, General David Petraeus, and, when necessary, even his own party.

In Fire-Breathing Liberal, Wexler brings readers onto the floor of the House and puts them at the center of some of the last decade’s biggest controversies. He passionately describes how he defended Bill Clinton from impeachment and how he stood up against the Bush brothers when the “butterfly” ballots in his Florida district wrongly decided the 2000 presidential election. He also offers an honest and brutal assessment of the Iraq war and explains why he has become a leader in the movement to impeach Vice President Cheney. And, with warmth and wit, Wexler shares some of the funniest stories from the corridors of Congress, including how he became The Colbert Report’s most talked-about guest.

This is a remarkably candid first-person account of recent political history that shows government as it has rarely been seen -- by a Democrat in the middle of the storms.

Robert Wexler is a six-term Democratic congressman representing Florida's 19th district. A member of the House Judiciary, Foreign Affairs, and Financial Services committees, he was named "Most Valuable Congressman" by "The Nation" in 2007 and one of "The 50 Most Effective Legislators in Congress" by "Congressional Quarterly." He and his wife, Laurie, have three children. David Fisher is an author and journalist who has co-written fifteen "New York Times" bestsellers. He most recently co-authored William Shatner's memoir, "Up Till Now."

Praise For Fire-Breathing Liberal: How I Learned to Survive (and Thrive) in the Contact Sport of Congress…

“Over the course of twelve years, Robert Wexler has fought for his constituents and his ideals, refusing to let the status quo in Washington dictate what is best for this country. His book is a testament to that fight.”--Senator Barack Obama “[A] remarkably open and honest book for a politician to have put into the light of day. If you want to know how Washington works, read this book.”--AfterDowningStreet.org

“[Wexler’s] tales-from-the-trenches biography juggles his appealing mix of idealism and realism, explanation and anecdote, in just the right amount. . . . This really is a blast of a book to read; getting the behind-the-scenes lowdown on maneuvering legislation through committees, hitting the campaign trail vicariously with a gifted and passionate pol . . . these are experiences political junkies should lap up in big doses.”
--Daily Kos

“A rollicking tour of politics in Florida, at the White House and in the U.S. Capitol. . . . The book is part autobiography, part civics lesson and part excoriation of the Republican stewardship of Congress before the Democratic takeover last year. It's an ambitious mix, but it works.”--St. Petersburg Times “A really good read . . . well-seasoned with hilarious moments . . . a welcome change from all the hypocrisy and pretensions of politicians puffed up with their own self-importance. . . . This book is a great education, and everyone can benefit from Wexler's unique perspective on politics and the political process of our beloved republic.”--Grand Rapids North Star “This is a very good book . . . Wexler, elected to congress in 1996, is a man who is passionate but practical, liberal but realistic . . . it is worth reading.”--Palm Beach Post "Wexler, a six-term Democratic congressman, opens his memoir-cum-civics lesson by saying, “I want to proclaim on every page of this book that I am a liberal Democrat and proud of it.” Fortunately for the reader, he is able to weave his proclamations into entertaining vignettes from the campaign trail to the halls of Congress in blow-by-blows of his involvement in defining moments of recent history: defending President Clinton from impeachment and challenging the Gore v. Bush decision . . . [a] fascinating and humorous insider account of the House of Representatives."--Publishers Weekly “With enthusiasm and candor, a passionate Democratic congressman gives readers an inside look at the House of Representatives during a period of declining government accountability . . . Wexler’s Southern Florida district was the center of the “butterfly ballot” controversy during the 2000 election, and he angrily recounts the zeal and heartbreak he saw in his elderly constituents, hundreds of whom mistakenly cast votes for Pat Buchanan that were never properly recounted. A staunch supporter of Israel and a member of the Foreign Affairs Committee, he endured a tense meeting with Syrian President Bashar Assad because he saw it as an opportunity to learn more about a powerful figure in Middle Eastern relations. When Assad asked, “Is George Bush crazy?” Wexler’s description of the thought process behind his carefully phrased answer offers a mini-lesson in diplomacy. His clarity and humanity in no way dampen his zest for picking fights. His list of Republican misdeeds includes strong-arming for votes, using fear to galvanize public support, misleading Congress into war and illegally wiretapping citizens . . . After loudly decrying the Clinton impeachment on the grounds that the president did not betray his country, he now declares that a worthy candidate for impeachment currently sits in the White House. Yet Wexler never loses humor or optimism. His wife, children and belief in democracy keep him grounded and working hard for civility and the ideals on which the nation was founded . . . Wexler’s approachable, eye-opening political autobiography overflows with intriguing detail and insight.”--Kirkus Reviews “As this inspiring book makes clear, Robert Wexler fights skillfully and passionately for progressive causes, and we’re closer to our goals because of him.”--Senator Edward Kennedy “I enjoyed Congressman Wexler’s book even more than I enjoy cocaine and prostitutes.”--Stephen Colbert, host of Comedy Central's The Colbert Report “Thank God for Robert Wexler -- the man who will always be my Congressman. This book proves he’s the only guy in politics who may have a brain and mouth bigger than mine!”--Randi Rhodes
or
Not Currently Available for Direct Purchase
Copyright © 2020 American Booksellers Association