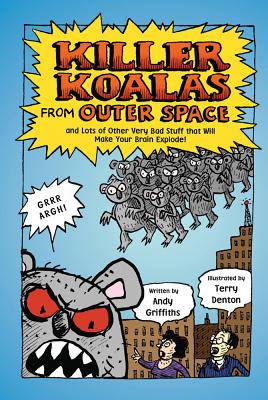 Killer Koalas from Outer Space and Lots of Other Very Bad Stuff that Will Make Your Brain Explode!

Surprise, absurdity, and laugh-out-loud humor are the hallmarks of this New York Times-bestselling author, and in Killer Koalas from Outer Space, Griffiths offers up a collection of ridiculous stories featuring zombie kittens, rocket stealing ants, and of course, killer koalas from outer space.


Praise For Killer Koalas from Outer Space and Lots of Other Very Bad Stuff that Will Make Your Brain Explode!…

“With a tone that veers between crass and cautionary, the nonstop absurdities and blatant hyperbole will easily find an audience with middle-graders.” —Booklist

“Andy Griffiths kicks up the silliness a few notches in this collection of ridiculous stories featuring zombie kittens, rocket stealing ants, and, of course, killer koalas from outer space.” —TucsonCitizen.com

“Plenty of kids who will laugh their heads off…” —Publishers Weekly

“The genius of this subversive little tome lies in its perfect combination of zany subject matter that will appeal to a broad spectrum of readers and a format that make it easily accessible to beginning and struggling readers.” —Kirkus, starred review

Terry Denton is known for his humorous illustration style and has worked with Andy Griffiths on the Treehouse series and the JUST! books among others. He lives by the sea in Australia with his wife, three kids, and a pop-up toaster that only toasts on one side.
Loading...
or
Not Currently Available for Direct Purchase