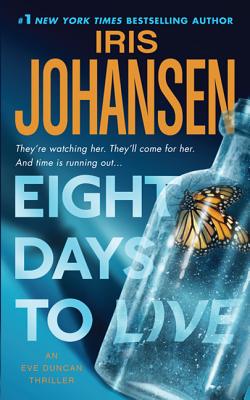 Number-one New York Times bestselling author Iris Johansen delivers a thriller that will chill you to the core: Eve Duncan's adopted daughter Jane has been targeted by a mysterious cult who has decided that she has only eight days to live

Eve Duncan and her adopted daughter, Jane Macguire, are pitted against the members of a secretive cult who have targeted Jane and have decided that she will be their ultimate sacrifice. In eight days they will come for her. In eight days, what Jane fears the most will become a reality. In eight days, she will die. It all begins with a painting that Jane, an artist, displays in her Parisian gallery. The painting is called "Guilt" and Jane has no idea how or why she painted the portrait of the chilling face. But the members of a cult that dates back to the time of Christ believe that Jane's blasphemy means she must die. But first, she will lead them to an ancient treasure whose value is beyond price. This elusive treasure, and Jane's death, are all that they need for their power to come to ultimate fruition. With Eve's help, can Jane escape before the clock stops ticking?

“You'll want to keep the lights on while reading!” —Romantic Times BOOKreviews on Blood Game

“Johansen is becoming a master of the macabre and paranormal thriller, and her latest riveting Eve Duncan tale has it all, from ghosts and secret cults to supernatural avengers.” —Booklist on Blood Game

“Readers won't soon forget either the enigmatic hero or the monstrous villain. This one's chilling to the bone!” —Romantic Times BOOKreviews on Deadlock

“Keeping the tension high and the pace relentless, prolific and compelling Johansen adds depth to her popular characters as she continues this suspenseful series.” —Booklist on Quicksand

“An exhilarating thriller…suspense that will keep readers on the edge of their seats.” —Booklist on Pandora's Daughter

“A fast-paced, non-stop, clever plot in which Johansen mixes political intrigue, murder, and suspense.” —USA Today on The Face of Deception

“Thoroughly gripping and with a number of shocking plot twists…packed all the right elements into this latest work: intriguing characters; creepy, crazy villain; a variety of exotic locations.” —New York Post on The Search

“A compelling novel that brims with action, intrigue, intricate relationships and a refreshing headstrong heroine.” —Bookreporter.com on Eight Days to Live

Iris Johansen is the New York Times bestselling author of Chasing the Night, Blood Game, Eve, and Eight Days to Live, among others. She began writing after her children left home for college, and first achieved success in the early 1980s writing category romances. In 1991, she began writing suspense historical romance novels, and in 1996 she turned to crime fiction, with which she has had great success. She lives near Atlanta, Georgia.
Loading...
or
Not Currently Available for Direct Purchase