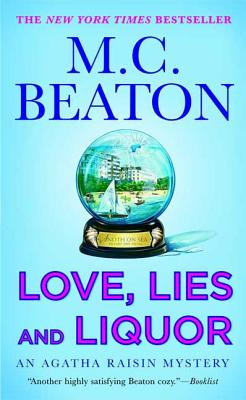 Agatha Raisin is lonely. Busy as she is with her detective agency and the meetings of the Carsely Ladies' Society, she still misses her ex-husband, James Lacey, so she welcomes his return to the cottage next door with her usual triumph of optimism over experience---especially when he invites her on holiday at a surprise location that was once very dear to him. With visions of a romantic hideaway in Italy or the Pacific dancing in her head, Agatha goes off happily with James to...Snoth-on-Sea, in Sussex.

While James may have fond memories of boyhood holidays there, Snoth-on-Sea has seen better days, as has the once-grand Palace Hotel, now run-down and tacky and freezing cold. Nor do the other guests have much to recommend them, especially the brassy honeymoon couple, Mr. and Mrs. Jankers, who pick a fight with Agatha in the dining room. But trouble has a way of following Agatha even if romance does not: Just as she and James are preparing to flee to warmer climes, Geraldine Jankers is found dead on the beach—strangled with Agatha's scarf. So much for Agatha's holiday fantasies: Not only is it time to put her detective skills to work, but the police are not even sure that she'll be allowed to leave town.

“Few things in life are more satisfying than to discover a brand-new Agatha Raisin mystery.” —The Tampa Tribune on Agatha Raisin and M. C. Beaton

“The irascible but endearing personality of Agatha Raisin is like a heady dash of curry. May we have another serving, please?” —Detroit Free Press on Agatha Raisin and M. C. Beaton

“If you've never read an Agatha Raisin novel, it's time to start.... All of them are cunningly plotted, beautifully written, and more fun than you can imagine.” —The Globe and Mail on Agatha Raisin and M. C. Beaton

“Beaton has a winner in the irrepressible, romance-hungry Agatha.” —Chicago Sun-Times on Agatha Raisin and M. C. Beaton

“Anyone interested in...intelligent, amusing reading will want to make the acquaintance of Mrs. Agatha Raisin.” —The Atlanta Journal-Constitution on Agatha Raisin and M. C. Beaton

“Welcome back to Carsely, the charming Cotswold village that's home to the sixteenth Agatha Raisin mystery. (If you've missed the first fifteen, just imagine a Barbara Pym novel with murder, mayhem and the sexual longings of a fiftysomething divorced lady sleuth.” —Publishers Weekly on The Perfect Paragon

M. C. Beaton, who was the British guest of honor at Bouchercon 2006, has been hailed as the "Queen of Crime" (The Globe and Mail). In addition to her New York Times and USA Today bestselling Agatha Raisin novels—now a hit show on Acorn TV and public television—Beaton is the author of the Hamish Macbeth series and many Edwardian mysteries. Born in Scotland, she currently divides her time between the English Cotswolds and Paris.
Loading...
or
Not Currently Available for Direct Purchase