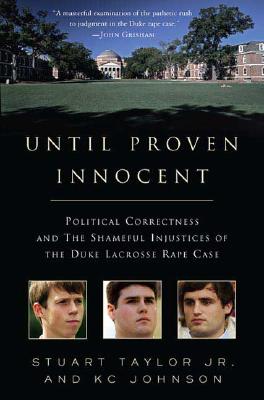 What began that night shocked Duke University and Durham, North Carolina.
And it continues to captivate the nation:  the Duke lacrosse team members' alleged rape of an African-American stripper and the unraveling of the case against them.
In this ever-deepening American tragedy, Stuart Taylor Jr. and KC Johnson argue, law enforcement, a campaigning prosecutor, biased journalists, and left-leaning academics repeatedly refused to pursue the truth while scapegoats were made of these young men, recklessly tarnishing their lives.
The story harbors multiple dramas, including the actions of a DA running for office; the inappropriate charges that should have been apparent to academics at Duke many months ago; the local and national media, who were so slow to take account of the publicly available evidence; and the appalling reactions of law enforcement, academia, and many black leaders.
Until Proven Innocent is the only book that covers all five aspects of the case (personal, legal, academic, political, and media) in a comprehensive fashion. Based on interviews with key members of the defense team, many of the unindicted lacrosse players, and Duke officials, it is also the only book to include interviews with all three of the defendants, their families, and their legal teams.
Taylor and Johnson's coverage of the Duke case was the earliest, most honest, and most comprehensive in the country, and here they take the idiocies and dishonesty of right- and left-wingers alike head on, shedding new light on the dangers of rogue prosecutors and police and a cultural tendency toward media-fueled travesties of justice. The context of the Duke case has vast import and contains likable heroes, unfortunate victims, and memorable villains--and in its full telling, it is captivating nonfiction with broad political, racial, and cultural relevance to our times.

Stuart Taylor Jr. is a columnist for "National Journal "and contributing editor for "Newsweek," writing about legal, policy, and political issues. A Harvard Law graduate, he covered legal affairs and the Supreme Court during eight years at "The New York Times." He is a nonresident senior fellow with the Brookings Institution and was nominated by "The New York Times "for a Pulitzer Prize for his Supreme Court coverage and by "National Journal "for a National Magazine Award for his columns on the Duke case.

KC Johnson is a history professor at Brooklyn College and CUNY. He has written over 800 posts of news-breaking analysis about the Duke case on his blog and was a consultant to ABC's Law and Justice Unit for the case. The author of four books, he has a Ph.D. from Harvard University.

Praise For Until Proven Innocent: Political Correctness and the Shameful Injustices of the Duke Lacrosse Rape Case…

Praise for Until Proven Innocent

Written by Stuart Taylor Jr. and K.C. Johnson, Until Proven Innocent is the most compelling true crime book of the year. Its immersion into the case and access to the major players makes the reader feel like an insider. The book is crammed full of salacious details, scientific details, background details, etc., but it never feels overwhelming. After reading the book, though, you will feel disgusted, if not outraged. -Amanda Barrett, The Chicago Sun-Times

In their vivid, at times chilling account, the authors are contemptuous of prosecutor Mike Nifong, whom the North Carolina legal establishment disbarred for his by now well-documented misconduct. But their most biting scorn is aimed at the "academic McCarthyism" that they say has infected top-rated American universities like Duke. -Evan Thomas, Newsweek

A superb new book… a book that not only reads like a legal thriller, but also exposes deep problems with America's legal system and academic culture. -The Economist

From the Scottsboro Boys to Clarence Gideon, some of the most memorable legal narratives have been tales of the wrongly accused. Now Until Proven Innocent, a new book about the false allegations of rape against three Duke lacrosse players, can join these galvanizing cautionary tales. Taylor and Johnson have made a gripping contribution to the literature of the wrongly accused. They remind us of the importance of constitutional checks on prosecutorial abuse. And they emphasize the lesson that Duke callously advised its own students to ignore: if you're unjustly suspected of any crime, immediately call the best lawyer you can afford. -Jeffrey Rosen, The New York Times Book Review

“Brutally honest, unflinching, exhaustively researched, and compulsively readable, Until Proven Innocent excoriates those who led the stampede—the prosecutor, the cops, the media—but it also exposes the cowardice of Duke’s administration and faculty. Until Proven Innocent smothers any lingering doubts that in this country the presumption of innocence is dead, dead, dead.”
—John Grisham

“This compelling narrative dramatizes the fearsome power of unscrupulous police and prosecutors to wreck the lives of innocent people, especially when the media and many in the community rush to presume guilt. The inspiring story of how the defense lawyers turned the tables on a dishonest DA points to the crying need for reforms to give defendants of modest means a fighting chance when law enforcement goes bad.”
—Nadine Strossen, president of the American Civil Liberties Union and professor of law at the New York Law School

“In what surely is this year’s most revealing, scalding and disturbing book on America’s civic culture, the authors demonstrate that the Duke case was symptomatic of the dangerous decay of important institutions—legal, academic, and journalistic. . . . With this meticulous report, the guilty have at last been indicted and convicted.”
—George F. Will

“A gripping, meticulous, blow-by-blow account of the whole grotesque affair. It is beautifully written, dramatic, and full of insights, exposing how vulnerable the prosecutorial system is to abuse and how ready the liberal media and PC academics are to serve as leaders of the lynch mob. A must read for anyone who cares about individual rights and justice.”
—William P. Barr, former attorney general of the United States

“A chilling, gripping account of how our judicial system can go terribly wrong. This is an important book that brings the Duke story to life and exposes troubling facts about our justice system and our citadels of higher learning. You may think you know the Duke story—but you don’t until you read this book.”
—Jan Crawford Greenberg, ABC News legal correspondent and author of Supreme Conflict

“The analysis of the notorious Duke rape case in this book is hard to accept. According to Stuart Taylor and KC Johnson, this episode was not just a terrible injustice to three young men. It exposed a fever of political correctness that is more virulent than ever on American campuses and throughout society. . . . Unfortunately for doubts, the authors lay out the facts with scrupulous care. This is a thorough and absorbing history of a shameful episode. ”—Michael Kinsley, columnist for Time magazine