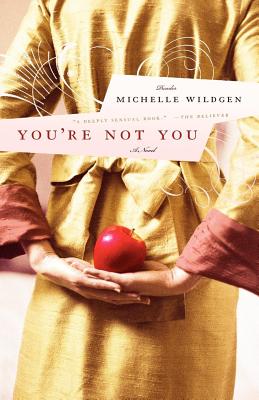 Bec is adrift. It's the summer before her junior year in college. She's sleeping with a married professor, losing interest in her classes, and equivocating about her career. She takes a job caring for Kate, a thirty-six-year-old woman who has been immobilized by ALS.

As it turns out, before the disease Kate was a stylish and commanding woman, an advertising executive and an accomplished chef. Now, as she and Bec spend long days together, Bec begins to absorb Kate's sophistication and her sensuality, cooking for her, sharing her secrets, and gradually beginning to live her own life with a boldness informed by Kate's influence. The more intense her commitment to Kate, the further Bec strays from the complacency of her college life. And when Kate's marriage veers into dangerous territory, Bec will have to choose between the values of her old life and the allure of an entirely new one.


Praise For You're Not You: A Novel…

“Michelle Wildgen writes with a fresh, appealing honesty and has done a marvelous job of capturing that youthful moment in our lives when we are like sponges ready to soak up someone else's character, taste, and charm.” —Francine Prose, People (four stars, Critic's Choice)

“A complex and satisfying dish: a story of intimate strangers and their impact on each other's lives.” —O, The Oprah Magazine

“A deeply sensual book.” —The Believer

“Wildgen's debut showcases the talent that won her inclusion in Best New American Voices 2004, and should take her further still.” —Publishers Weekly

Michelle Wildgen is a senior editor at Tin House. Her first novel, You’re Not You, a New York Times Editor’s Choice and one of People Magazine’s Ten Best Books of 2006, is now in development for film by Hilary Swank and Denise DiNovi. She is also the author of the acclaimed novel But Not for Long. Wildgen’s work has appeared in O, The Oprah Magazine, The New York Times, and literary journals including Prairie Schooner and TriQuarterly.