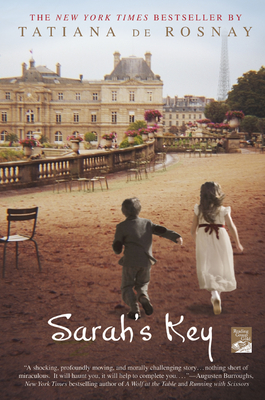 “Sarah's Key is told from both the perspective of an 10-year-old girl whose family is rounded up during the Vel D'Hiv in France in 1942 and an American who presently lives in Paris. The heartbreak is real, the love is true, and the need to find out how their two lives are connected made this one of my absolute favorites!”
— Sarah Galvin, The Bookstore Plus, Lake Placid, NY
View the List

“Sarah's Key is told from both the perspective of an 10-year-old girl whose family is rounded up during the Vel D'Hiv in France in 1942 and an American who presently lives in Paris. The heartbreak is real, the love is true, and the need to find out how their two lives are connected made this one of my absolute favorites!”
— Sarah Galvin, The Bookstore Plus, Lake Placid, NY
View the List

“Sarah's Key is the story of Sarah, a 12-year-old girl swept up by the police in the Vel D'Hiv roundup in occupied France, and of journalist Julia Jarmond, who is writing about the event 60 years later. This hauntingly powerful story will remain with you long after the last page is turned.”
— Linda Walonen, Bay Books, San Ramon, CA
View the List

“This emotionally intense story of a young girl who is caught up in a roundup of Jewish families in Paris during World War II is a powerful selection for reading groups.”
— Sandy Palmer, Wy'east Book Shoppe & Art Gallery, Welches, OR
View the List

Paris, July 1942: Sarah, a ten year-old girl, is brutally arrested with her family by the French police in the Vel' d'Hiv' roundup, but not before she locks her younger brother in a cupboard in the family's apartment, thinking that she will be back within a few hours.
Paris, May 2002: On Vel' d'Hiv's 60th anniversary, journalist Julia Jarmond is asked to write an article about this black day in France's past. Through her contemporary investigation, she stumbles onto a trail of long-hidden family secrets that connect her to Sarah. Julia finds herself compelled to retrace the girl's ordeal, from that terrible term in the Vel d'Hiv', to the camps, and beyond. As she probes into Sarah's past, she begins to question her own place in France, and to reevaluate her marriage and her life.
Tatiana de Rosnay offers us a brilliantly subtle, compelling portrait of France under occupation and reveals the taboos and silence that surround this painful episode.

“This is a remarkable historical novel, a book which brings to light a disturbing and deliberately hidden aspect of French behavior towards Jews during World War II. Like Sophie's Choice, it's a book that impresses itself upon one's heart and soul forever.” —Naomi Ragen, author of The Saturday Wife and The Covenant

“Sarah's Key unlocks the star crossed, heart thumping story of an American journalist in Paris and the 60-year-old secret that could destroy her marriage. This book will stay on your mind long after it's back on the shelf.” —Risa Miller, author of Welcome to Heavenly Heights

Tatiana de Rosnay is the author of over ten novels, including the New York Times bestseller Sarah's Key, an international sensation with over 11 million copies in 44 countries worldwide. Together with Dan Brown, Stephenie Meyer, and Stieg Larsson, she has been named one of the top ten fiction writers in Europe. De Rosnay lives in Paris.

1. What did you know about France’s role in World War II—and the Vél d’Hiv round-up in particular—before reading Sarah’s Key? How did this book teach you about, or change your impression of, this important chapter in French history?

2. Sarah’s Key is composed of two interweaving story lines: Sarah’s, in the past, and Julia’s quest in the present day. Discuss the structure and prose-style of each narrative. Did you enjoy the alternating stories and time-frames? What are the strengths or drawbacks of this format?

3. Per above: Which “voice” did you prefer: Sarah’s or Julia’s? Why? Is one more or less authentic than the other? If you could meet either of the two characters, which one would you choose?

4. How does the apartment on la rue de Saintonge unite the past and present action—and all the characters—in Sarah’s Key? In what ways is the apartment a character all its own in?

5. What are the major themes of Sarah’s Key?

6. de Rosnay’s novel is built around several “key” secrets which Julia will unearth. Discuss the element of mystery in these pages. What types of narrative devices did the author use to keep the keep the reader guessing?

7. Were you surprised by what you learned about Sarah’s history? Take a moment to discuss your individual expectations in reading Sarah’s Key. You may wish to ask the group for a show of hands. Who was satisfied by the end of the book? Who still wants to know—or read—more?

8. How do you imagine what happens after the end of the novel? What do you think Julia’s life will be like now that she knows the truth about Sarah? What truths do you think she’ll learn about herself?

9. Among modern Jews, there is a familiar mantra about the Holocaust; they are taught, from a very young age, that they must “remember and never forget” (as the inscription on the Rafle du Vél d’Hiv) Discuss the events of Sarah’s Key in this context. Who are the characters doing the remembering? Who are the ones who choose to forget?

10. What does it take for a novelist to bring a “real” historical event to life? To what extent do you think de Rosnay took artistic liberties with this work?

11. Why do modern readers enjoy novels about the past? How and when can a powerful piece of fiction be a history lesson in itself?

12. We are taught, as young readers, that every story has a “moral.” Is there a moral to Sarah’s Key? What can we learn about our world—and ourselves—from Sarah’s story?