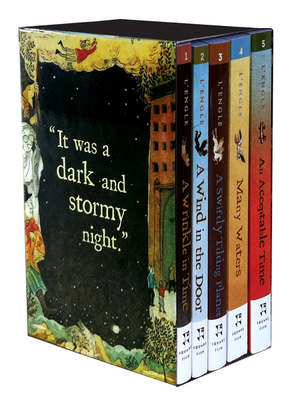 For the first time, Madeline L'Engle's classic sci-fi / fantasy series is being offered as a Quintet (Wrinkle in Time, A Wind in the Door, A Swiftly Tilting Planet, Many Waters, and An Acceptable Time) in a beautifully designed box set featuring art by Taeeun Yoo.

A Wrinkle in TimeOne of the most significant novels of our time. This fabulous, ground-breaking science-fiction and fantasy story is the first of five in the Time Quintet series about the Murry family. A Wrinkle in Time is soon to be a major motion picture from Disney, directed by Ava DuVernay, starring Storm Reid, Oprah Winfrey, Reese Witherspoon and Mindy Kaling.

A Wind in the DoorWhen Charles Wallace falls ill, Meg, Calvin, and their teacher, Mr. Jenkins, must travel inside C.W. to make him well, and save the universe from the evil Echthros.

A Swiftly Tilting PlanetThe Murry and O'Keefe families enlist the help of the unicorn, Gaudior, to save the world from imminent nuclear war.

Many WatersMeg Murry, now in college, time travels with her twin brothers, Sandy and Dennys, to a desert oasis that is embroiled in war.

An Acceptable TimeWhile spending time with her grandparents, Alex and Kate Murry, Polly O'Keefe wanders into a time 3,000 years before her own.

A Wrinkle in Time is one of my favorite books of all time. I've read it so often, I know it by heart. Meg Murry was my hero growing up. I wanted glasses and braces and my parents to stick me in an attic bedroom. And I so wanted to save Charles Wallace from IT. Meg Cabot on A Wrinkle in Time

A book that every young person should read, a book that provides a road map for seeking knowledge and compassion even at the worst of times, a book to make the world a better place. Cory Doctorow on A Wrinkle in Time

A suspenseful, life-and-death drama that is of believable cosmic significance. Complex and rich in mystical religious insights, this is breathtaking entertainment. School Library Journal, starred review on A Wind in the Door

Madeleine L'Engle mixes classical theology, contemporary family life, and futuristic science fiction to make a completely convincing tale that should put under its spell both readers familiar with the Murrys and those meeting them for the first time. The New York Times Book Review on A Wind in the Door

An intricately woven fantasy ... Theme is L'Engle's greatest forte, and once again she proves this with a compelling plot, rich in style that vibrates with provocative thoughts on universal love, individual caring, and the need for the joy in living. Booklist, starred review on A Swiftly Tilting Planet

This will be enjoyed for its suspense and humor as well as its other levels of meaning. Kirkus Reviews on Many Waters

L'Engle has again achieved the award-winning style of A Wrinkle in Time ... Highly recommended. VOYA on An Acceptable Time