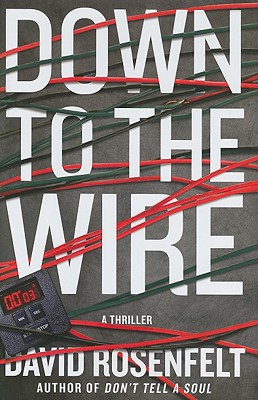 Down to the Wire (Hardcover)

A reporter for the Bergen News, Chris Turley could never measure up to his father. Edward Turley, a combination of Bob Woodward and Ernie Pyle, was one of the last great investigative reporters and a difficult man to impress. While stuck covering press conferences and town hall meetings, Chris, his father’s legend in mind, has always dreamed of his own Pulitzer, however unlikely it seems.

Then one day while he’s waiting to meet a source, a giant explosion takes out half of an office building next door. Shocked into action, Chris saves five people from the burning building. His firsthand account in the next day’s paper makes him a hero and a celebrity.

And that’s not all. The source’s next tip delivers a second headline-grabber of a story for Chris, and suddenly his career is looking a lot more like his dad’s. But then it seems this anonymous source has had a plan for Chris all along, and his luck for being in the right place at the right time is not a coincidence at all. What seemed like a reporter’s dream quickly becomes an inescapable nightmare.

Down to the Wire, David Rosenfelt’s shocking new thriller about an ordinary man who gets exactly what he’s always wanted at a price he can never pay, is an intense thrill ride that will have readers racing through the pages right up to the end.

David Rosenfelt is the Edgar and Shamus Award--nominated author of seven Andy Carpenter novels and a stand-alone, "Don't Tell a Soul." He and his wife live in California with their twenty-seven golden retrievers.

Praise For Down to the Wire…

"Near the start of Rosenfelt's dynamite thriller, his second stand-alone after 2008's Don't Tell a Soul, reporter Chris Turley from the Bergen News, is about to meet an anonymous tipster at a Teaneck, N.J., park to discuss "corruption by a high-level government official" when an explosion rips through an office building opposite the park. Chris makes headline news by saving five people from the wreckage. Chris's source, who calls himself "P.T.," soon starts to brag about a killing spree (using remotely detonated bombs and poison darts), which won't end unless Chris kills himself. Aided by his entertainment editor girlfriend, an FBI agent, and a homicide detective, Chris embarks on a wild hunt for the slippery psycho. Might P.T. be embittered Peter Randolph, who blames Chris's late father, a famed journalist, for his own father's suicide? Rosenfelt's sly humor, breathless pacing, and terrific plot twists keep the pages spinning toward the showdown on New Year's Eve in Times Square." --Publishers Weekly (starred review)

Praise for Don’t Tell a Soul and David Rosenfelt

“This fast-paced and brightly written tale spins along. . . . Don't Tell a Soul is a humdinger.”
---St. Louis Post-Dispatch

“[Rosenfelt] has pulled together a cynical political thriller that rings true in this age of terrorism, media hype, and Washington scandals. . . . It’s an enjoyable tale.”
---Minneapolis Star Tribune

“Stellar . . . Rosenfelt keeps the plot hopping and popping as he reveals a complex frame-up of major proportions, with profound political ramifications both terrifying and enlightening.”
---Publishers Weekly (starred review)

“High-voltage entertainment from an author who plots and writes with verve and wit . . . Plot twists and red herrings abound, and Rosenfelt ratchets up tension with the precision of a skilled auto mechanic wielding a torque wrench.”
---Booklist (starred review)

“Rosenfelt’s first stand-alone novel is a riveting thriller that should boost him to best-seller status. . . . Compelling twists and turns, a lightning-fast pace, and breathtaking suspense make this a harrowing ride.”
---Library Journal (starred review)

“Absolute fun . . . Anyone who likes the Plum books will love this book.”
---Janet Evanovich on Bury the Lead