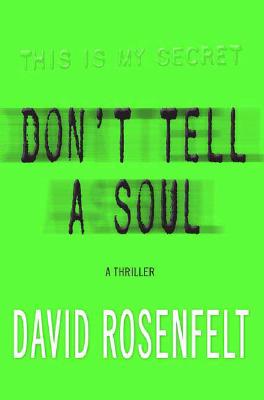 “What starts out as a conversation in a bar with a total stranger becomes a tension-filled game being played by someone out to get Tim Wallace, an innocent victim who becomes a prime murder suspect. This exciting story has a clever plot and it races along as Tim finds himself in deeper and deeper trouble.”
— Susan Wasson, Bookworks, Albuquerque, NM
View the List

Tim Wallace's wife died in a boating accident several months ago. Tim was the only eye witness, and one New Jersey cop is sure he killed her. He didn't, but even if the police eventually clear his name, he'll never get over this terrible tragedy.
On New Year's Eve, his two best friends and business partners finally convince him to go out for the first time since Maggie's death, and at their neighborhood pub just a few minutes before midnight, things in Tim Wallace's life go from bad to worse. "Can you keep a secret? A really big one?" a drunken stranger asks him. Before Tim can say anything or turn away, the man confesses to a months-old murder, even offering as proof the location of the woman's body. "Now it's your problem," he says and walks away.
When the man turns out to have been telling the truth, Tim's life and work are put under the microscope again by the cops, and this time they're not giving up. But neither is Tim, even when things keep getting worse for him, and eventually he realizes he's the only person who can figure out what's really going on---even if it kills him.
David Rosenfelt, popular author of six Andy Carpenter mysteries, including the recent hit "Play Dead," delivers his first standalone with "Don't Tell a Soul," combining the suspense and great characters of his mystery series with an unputdownable, thrilling read.

David Rosenfelt is the Edgar and Shamus Award--nominated author of six novels featuring lawyer Andy Carpenter, most recently "Play Dead." He and his wife live in California with their thirty-seven golden retrievers.

“A cracking good yarn . . . There is no way you can read this novel without becoming completely caught up in the story. As always, Andy’s offbeat, outspoken personality shines on every page, and the balance of humor and mystery is dead-on. There is nothing else to say about this fine novel except this: read it as soon as you can.”
---Booklist on Play Dead

“If there aren’t any real-life lawyers as entertaining, as witty, and as willing to tilt at windmills as Andy Carpenter . . . then there should be. . . . Written with flair and humor, this is perfect light reading.”
---Publishers Weekly (starred review) on Dead Center

“A clever plot and breezy style . . . An absorbing legal thriller.”
---The Boston Globe on Bury the Lead