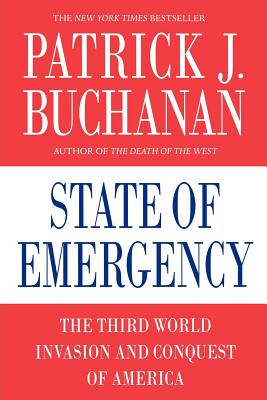 The Third World Invasion and Conquest of America

"The one absolutely certain way of bringing this nation to ruin, of preventing all possibility of its continuing to be a nation at all, would be to permit it to become a tangle of squabbling nationalities," said Theodore Roosevelt. State of Emergency will demonstrate that this is exactly what is happening to America and may now be unstoppable.

The United States of 1960 was a First World nation, 90% of whose people traced their ancestry to Europe, 97% of whom spoke English. We studied the same history and literature in school, went to the same movies, read the same books, listened to the same radio and TV, cherished the same heroes. We were one nation and one people.

That America is dead and gone. The deconstruction of America -- along the lines of culture and values, language and faith, allegiance and loyalty -- has begun. By 2050, Americans of European descent will be a minority in the United States. One hundred million Hispanics with ties of language and loyalty to Mexico and Latin America will be living here, concentrated in the Southwest

It is the thesis of State of Emergency that the Melting Pot is broken beyond repair, that assimilation and Americanization are not taking place, and that only action is to seal and secure America's borders to halt the flow of over a million legal and illegal immigrants a year, and to begin the Americanization of the tens of millions of aliens in our midst can save America. Our civilization cannot survive indefinitely what is going on.

State of Emergency reveals who is doing this to us, why they are doing it, why this is our last chance, and how, if the will is there, we can yet save America from Balkanization and break-up.

Patrick J. Buchanan was a senior advisor to three American Presidents, ran twice for the Republican nomination in 1992 and 1996, and was the Reform Party’s Presidential candidate in 2000. The author of seven books, Mr. Buchanan is a syndicated columnist and a political analyst for MSNBC. He is also Editor Emeritus of the political magazine, The American Conservative. He lives in McLean, Virginia.