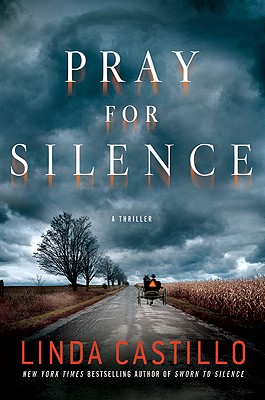 "New York Times" bestselling author Linda Castillo delivers an electrifying thriller in which Chief of Police Kate Burkholder must confront a dark evil to solve the mysterious murders of an entire Amish family.

The Plank family moved from Lancaster, Pennsylvania, to join the small Amish community of Painters Mill less than a year ago and seemed the model of the Plain Life until on a cold October night, the entire family of seven was found slaughtered on their farm. Police Chief Kate Burkholder and her small force have few clues, no motive, and no suspect. Formerly Amish herself, Kate is no stranger to the secrets the Amish keep from the English and each other but this crime is horribly out of the ordinary.

State agent John Tomasetti arrives on the scene to assist. He and Kate worked together on a previous case during which they began a volatile relationship. They soon realize the disturbing details of this case will test their emotional limits and force them to face demons from their own troubled pasts and for Kate, a personal connection that is particularly hard to bear.

When she discovers a diary that belonged to one of the teenaged daughters, Kate is shocked to learn the girl kept some very dark secrets and may have been living a lurid double life. Who is the charismatic stranger who stole the young Amish girl's heart? Could the brother a man with a violent past, rejected and shunned by his family and the Amish community, have come to seek out revenge? As Kate's outrage grows so does her resolve to find the killer and bring him to justice even if it means putting herself in the line of fire.

Topping her own bestselling debut, Linda Castillo once again immerses us in the world of the Amish with a chilling story that is both a fast-paced thriller and intriguing psychological puzzle.

Linda Castillo is the "New York Times" bestselling author of the Kate Burkholder novels, including "Sworn to Silence" and "Breaking Silence," crime thrillers set in Amish country. She is the recipient of awards including the Daphne du Maurier Award of Excellence, the Holt Medallion and a nomination for the RITA. Besides writing, Castillo's other passion is horses, particularly her Appaloosa, George. She lives in Texas with her husband.

Praise For Pray for Silence…

“It’s shades of In Cold Blood when a family of seven is brutally murdered at their home in Painters Mill, Ohio. But the Plank family was Amish—and their teenage daughter was flirting outside the fold. Another chilling thriller by the author of 2009’s Sworn to Silence.”—People magazine

“Violent and earthy, and completely impossible to put down.”—BookPage

"Though the violence level is high, the brutality is offset by Kate’s and her team’s very capable police procedure and investigation. Another solid effort that will appeal to fans of Karin Slaughter and Tami Hoag.”—Library Journal

“The second installment in Castillo’s strong series finds Police Chief Kate Burkholder once again face-to-face with pure evil. . . . A unique setting and a very human heroine make this a good recommendation for readers seeking an alternative to the urban whodunit.”—Booklist

“The second book in Castillo’s series . . . is as well crafted, interesting and unique as the first.  The combination of Amish life and the brutal work of a police chief create plenty of tension and excitement.”—Romantic Times (4 ½ stars, top pick)

“Castillo pushed boundaries with her first in this series, but Pray for Silence blows all of those out of the water: her handling of the subject matter is impressive and the book is very well plotted. Again, not for the easily shocked and one that will utterly consume you as you follow Burkholder and her team. This series seriously needs a warning label.”—Bookbitch.com

"With a serial killer and now a mass murder in tiny Painters Mill, Castillo will need to be inventive to maintain the plausibility in this addictive series. Fortunately, she seems up to the task.”—Akron Beacon Journal
or
Not Currently Available for Direct Purchase
Copyright © 2020 American Booksellers Association