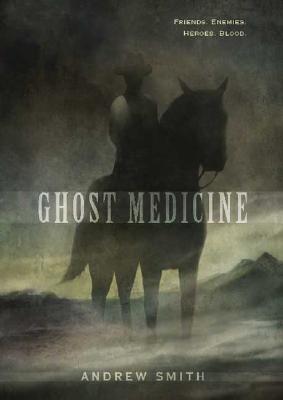 The summer before Troy Stotts turns seventeen, his mother dies. Troy and his father barely speak, communicating instead by writing notes on a legal pad by the phone. Troy spends most of his time with his closest friends: Tom Buller, brash and fearless, the son of a drunk; Gabe Benavidez, smart enough to know he’ll never take over the family ranch; and Gabe’s sister, Luz, whose family overprotects her, and who Troy has loved since they were children.

Troy and his friends don’t want trouble. They want this to be the summer of what Troy calls “ghost medicine,” when time seems to stop, so they won’t have to face the past or the future. But before the summer is over, their paths will cross in dangerous and fateful ways with people who will change their lives: Rose, a damaged derelict who lives with a flock of wild horses and goats; and Chase Rutledge, the arrogant sheriff’s son.

Troy and his friends want to disappear. Instead, they will become what they least expect —brothers, lovers, heroes, and ghosts.

Praise for Ghost Medicine: "This book is a pitch-perfect coming-of-age tale destined to be held aloft alongside other classics of young adult literature.  The story flows like stark, lovely poetry shared by best friends around a mountainside campfire."--VOYA (Voice of Youth Advocates) "Smith's first novel, a deceptively simple coming-of-age story, defies expectations via its sublime imagery and its elliptical narrative structure."--Publishers Weekly, starred review "Troy wishes to be lost, but his greatest hope is to be found, and Ghost Medicine beautifully captures that paradox in this timeless and tender coming-of-age story. Not only will it inspire readers to prod the boundaries of their own courage, but it will also remind them that life and love are precious and fleeting.”--School Library Journal “…the slowly building narrative gathers the heart-wrenching moments together to create a fully engrossing tale….Troy’s attempts at invisibility contrast with other characters’ desire for recognition and fatherly approval…. Smith canters to a satisfying finish.”--Kirkus Reviews

Andrew Smith is the author of "The Marbury Lens," named an American Library Association Best Book for Young Adults, and "In the Path of Falling Objects." In addition to writing, he teaches high school advanced placement classes and coaches rugby. He lives in Southern California with his family, in a rural location in the mountains.
Loading...
or
Not Currently Available for Direct Purchase