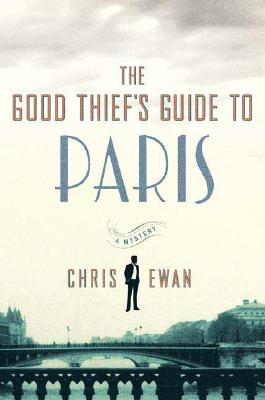 The Good Thief's Guide to Paris

The moment I’d scanned the outside of the building, I turned to Bruno and said, “First impressions, it looks straightforward.” Looking back, I can’t help but wonder what I was thinking. I mean, put that line at the opening of a crime novel and it’s practically a guarantee that everything is about to get complicated.


Charlie Howard—globe-trotting mystery writer, professional thief, and poor decision maker—is in Paris. Flush with the success of his latest book reading, not to mention a few too many glasses of wine, Charlie agrees to show a complete novice how to break into an apartment in the Marais. Fast-forward twenty-four hours and Charlie’s hired to steal an ordinary-looking oil painting—from the exact same address.

Mere coincidence? Charlie figures there’s no harm in finding out—until a dead body turns up in his living room and he finds himself evading the law while becoming caught up in a quite outrageous heist. And that’s before Charlie’s literary agent, Victoria (who’s naive enough to assume that he looks like his author photo), finally decides they should meet face-to-face.

Nobody ever said a life of suspense was easy, but Charlie, the most disarmingly charming burglar since Cary Grant, soon finds things are getting way out of control.

Praise For The Good Thief's Guide to Paris: A Mystery…

"Fast and funny, Ewan’s second offering in the Good Thief series is even better than the first."
--Booklist (Starred Review)

"A feast for the amoral."
--Kirkus Reviews

"Wonderful descriptions of locale, engaging and wacky characters, and an entertaining plot that will leave readers eager for the next book. Highly recommended."
--Library Journal

Praise for The Good Thief’s Guide to Amsterdam


“This impressive debut, a comic whodunit . . . owes much of its charm and success to its compelling antihero, Charles Howard. . . . The ease with which Ewan creates a memorable protagonist and pits him against a plausible and tricky killer will be the envy of many more established authors. The detection is first-rate, and Howard is a fresh, irreverent creation who will make readers eager for his next exploit.” —Publishers Weekly (starred review)

“Charlie is agreeable company . . . as he narrates his own skilled thievery and flights of quick thought. Seeing the pieces fly together at the end without a single missing bit is pretty fun.” —Houston Chronicle

“[An] enjoyable plot and engaging characters. . . . A good first novel with lots of potential as a series.” —Booklist

“Although there’s no telling where Ewan may send his likable hero next, read the book and see if you don’t agree that, wherever it is, it must be soon.” —The News & Observer

Chris Ewan, a lawyer specializing in the film industry, lives on the Isle of Man. ""
Loading...
or
Not Currently Available for Direct Purchase