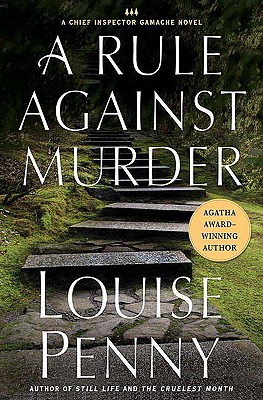 A Rule Against Murder

“This is the fourth book in the utterly charming, utterly compelling series featuring Quebec's Chief Inspector Gamache. In this one, he and his wife visit an isolated resort for their wedding anniversary, becoming embroiled in the inner workings of a more-than-dysfunctional family. Penny's gorgeous prose and stunning skill with character development take this book to the top of the genre.”
— Robin Agnew, Aunt Agatha's Ltd., Ann Arbor, MI
View the List

""What happened here last night isn't allowed," said Madame Dubois."
"
""It was such an extraordinary thing to say it stopped the ravenous Inspector Beauvoir from taking another bite of his roast beef on baguette."
"
"""You have a rule against murder?" he asked."
"
"""I do. When my husband and I bought the Bellechasse we made a pact....Everything that stepped foot on this land would be safe.""
"
"
"
"It is the height of summer, and Armand and Reine-Marie Gamache are celebrating their wedding anniversary at Manoir Bellechasse, an isolated, luxurious inn not far from the village of Three Pines. But they're not alone. The Finney family--rich, cultured, and respectable--has also arrived for a celebration of their own.
The beautiful Manoir Bellechasse might be surrounded by nature, but there is something unnatural looming. As the heat rises and the humidity closes in, some surprising guests turn up at the family reunion, and a terrible summer storm leaves behind a dead body. It is up to Chief Inspector Gamache to unearth secrets long buried and hatreds hidden behind polite smiles. The chase takes him to Three Pines, into the dark corners of his own life, and finally to a harrowing climax.


Praise For A Rule Against Murder: A Chief Inspector Gamache Novel…

“If you don’t give your heart to Gamache, you may have no heart to give.” --Kirkus Reviews (starred review)

“With its small-town hominess, the Canadian village of Three Pines draws the reader into its quaint traditions.Who wouldn’t be charmed by the dramas of a community where Easter egg hunts and socials at the bed and breakfast are the most exciting events? Yet it is Penny’s fastidious, cultured, and smart Inspector Gamache who makes [The Cruelest Month] impossible to put down.” --People

“The cozy mystery has a graceful practitioner in Louise Penny.” --The New York Times Book Review


“Expertly plotted… Arthur Ellis Award--winner Penny paints a vivid picture of the French-Canadian village, its inhabitants, and a determined detective who will strike many Agatha Christie fans as a twenty-first-century version of Hercule Poirot.” --Publishers Weekly (starred review)

“Penny’s plotting has been compared to Agatha Christie’s...in these wonderful books full of poetry and weather and a brooding manor house, and people who read and think and laugh and eat a lot of really excellent food. Move over, Mitford.” --The Charlotte Observer

LOUISE PENNY is the #1 "New York Times "and "Globe and Mail "bestselling author of ten Chief Inspector Armand Gamache novels. She has won numerous awards, including a CWA Dagger and the Agatha Award (five times) and was a finalist for the Edgar Award for Best Novel. She lives in a small village south of Montreal."
Loading...
or
Not Currently Available for Direct Purchase