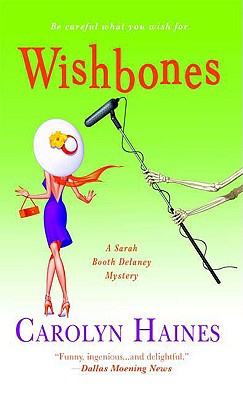 It's time for Sarah Booth to pack up her hound dog and her P.I. business and take a shot at stardom Soon she aces the screen test for a racy remake of the movie "Body Heat" alongside leading man Graf Miliau. The chemistry between them is undeniable and why not? Graf has already starred in one of Sarah's previous affairs and is well on his way to landing a big part in the sequel.

Thrilled as Sarah is to be in Hollywood, her dream-come-true comes at a price. She has to leave behind her family's ancestral home in Mississippi, her closest friends, and the possibility of settling down with her longtime love to film on location in Costa Rica. It's not long before rivalries flare, unexplained accidents occur, and this leading lady mysteriously finds herself in some steamy tabloids without turning up in a single frame of film.

“Stephanie Plum meets the Ya-Ya Sisterhood! Non-Southerners will find the madcap adventure an informative peek into an alien culture.”—Kirkus Reviews

Carolyn Haines is the author of the Sarah Booth Delaney Mysteries, including "Greedy Bones," "Bone Appetit," and "Bones of a Feather." She is the recipient of both the Harper Lee Distinguished Writing Award and the Richard Wright Award for Literary Excellence. Before writing fiction, she worked for several years as a journalist, and first visited the Delta, the setting for her mysteries, to do a newspaper story on Parchman State Prison. Born and raised in Mississippi, she now lives in Alabama on a farm with more dogs, cats, and horses than she can possibly keep track of.
Loading...
or
Not Currently Available for Direct Purchase