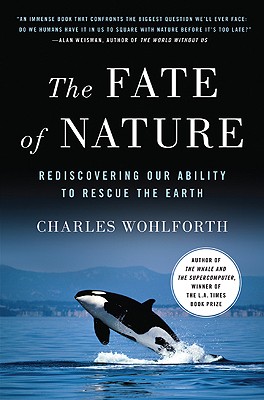 The Fate of Nature

Rediscovering Our Ability to Rescue the Earth

“What capacity for good lies in the hidden depths of people?”

Starting with this question, award-winning author Charles Wohlforth sets forth on a wide-ranging exploration of our relationship with the world. In The Fate of Nature, he draws on science, spirituality, history, economics, and personal stories to reveal answers about the future of that relationship.

There is no better place to witness the highs and lows of our treatment of the natural world than the vast wilds, rocky coasts, and shifting settlements of Alaska.  Since the first encounter between Captain Cook's crew and the Alaskan Natives in 1778, there have been countless struggles between people who have had different plans for the region. Some have hoped to preserve Alaska as they found it, while others aimed to create something new in its place.

Incidents such as the Exxon Valdez oil spill may seem like cause for despair. In the face of such profound tragedies, Charles Wohlforth has found heartening developments in the science of human altruism. This new understanding of what causes humans to cooperate and act conscientiously may be the first step toward taking the actions necessary to preserve an environment that has already been altered drastically in our lifetime.

A clear-eyed, original work of research, reportage, and philosophical reflections, The Fate of Nature gives us a chance to change the way we think about our place in society and the world at large.


Praise For The Fate of Nature: Rediscovering Our Ability to Rescue the Earth…

“In his thoughtful and felicitous new book, The Fate of Nature, Charles Wohlforth presents an inspired view of humankind’s future.”--Anchorage Daily News

"Intellectual, philosophical and packed with feeling, Wohlforth's hopeful arguments for preserving our natural world are also practical and ring true as a bell, a gentle pause in the noise that often takes the place of civilized debate on the topic."--Book Page

“An immense book that confronts the biggest question we’ll ever face: Do we humans have it in us to square with nature before it’s too late?” —ALAN WEISMAN, author of The World Without Us

“The Fate of Nature is an important and compelling read. Wohlforth develops critical, unexamined issues about our relationship to nature through the vivid characters and magnificent landscapes of coastal Alaska. You’ll be intrigued, and you may be changed.”—ROBERT F. KENNEDY JR.

“The great question--to be settled in the next few decades--is whether 'human nature' will force us to wreck our planet, or whether it will turn out to be the saving grace. Charles Wohlforth doesn't make assumptions--he makes sense. And hopeful sense at that!”—BILL MCKIBBEN, author of Deep Economy

"An ambitious and big-hearted book, The Fate of Nature contains lessons we all need to learn. It should be read by everyone who cares about the oceans and the many lives--human or otherwise--that depend on them."—ELIZABETH KOLBERT, author of Field Notes from a Catastrophe

"No one does a better job of bringing the real Alaska to life than Charles Wohlforth. In The Fate of Nature, he has combined compelling story-telling with a provocative contribution to our national environmental debate. I don’t agree with everything Charles has to say, but his eye-opening book is an invaluable read for anyone who cares about my state and our planet and wants to leave it better than we found it."—SENATOR MARK BEGICH, Alaska

“The hidden truths in The Fate of Nature gradually come into focus through the adventures, stories, and exhilarating experiences conveyed with masterful grace and deep understanding of ancient wisdom and modern realities by Charles Wohlforth.  A must-read for all who care about securing an enduring future for humankind within the natural systems that sustain us.”—SYLVIA A. EARLE, Explorer in Residence, National Geographic

CHARLES WOHLFORTH is a lifelong Alaska resident and author of "The Whale and the Supercomputer," winner of the L.A. Times Book Prize, as well as many other books and articles about nature, history, politics, and travel in the North. An avid cross-country skier, Wohlforth lives during the winter in Anchorage with his wife, Barbara, and their four children. In summer they live off the grid on a remote Kachemak Bay shore reachable only by boat. Wohforth began his career as a reporter for a small-town newspaper. As a reporter for the "Anchorage Daily News" he worked months in the field covering the "Exxon Valdez "oil spill. Learn more online at www.fateofnature.com.