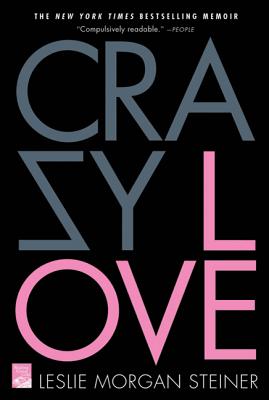 At 22, Leslie Morgan Steiner seemed to have it all: good looks, a Harvard diploma, a glamorous job in New York City. Plus a handsome, funny boyfriend who adored her. But behind her façade of success, this golden girl hid a dark secret. She'd made a mistake shared by millions: she fell in love with the wrong person.

At first, Leslie and Conor seemed perfect together. Then came the fights she tried to ignore: he pushed her down the stairs, choked her during an argument, and threatened her with a gun. Several times, he came close to making good on his threat to kill her. With each attack, Leslie lost another piece of herself. Why didn't she leave? She stayed because she loved him. Gripping and utterly compelling, Crazy Love takes you inside the violent, devastating world of abusive love and makes you feel the power and powerlessness of abuse that can take place anywhere and to anyone. Crazy Love draws you in -- and never lets you go.

“[Readers will] cheer as Steiner… slowly regains her sense of self and escapes this crazy love.” —The Washington Post

“A courageous and revealing look at domestic abuse and one woman's effort to free herself.” —Booklist

“Riveting… An elegant stylist, Morgan eschews the easy pop psychology route in favor of a thought-provoking peek into how violence and abuse curdle into distorted thinking.” —Minneapolis Star Tribune

“In this gripping, compulsively readable story of romantic love and its dreadful underside, Leslie Morgan Steiner has written a classic. What makes love turn to violence? How can a woman know she is at risk? These are some of the questions elegantly addressed in Steiner's important book about how she survived a marriage which almost killed her. Her painful journey from love to fear to sanity is ultimately heartening and serves a profound lesson. This book should be required reading for all women.” —Susan Cheever

“Crazy Love reminds us that sometimes a marriage can go from being a mere skirmish in the battle of the sexes to becoming a full-on physical war. The book stands as a warning to all women to be vigilant when they pick their spouses, to always have an exit strategy in mind, to know where the money in the marriage is, to pick up as much education as possible – all for the possible day when they may find themselves battered, broke, terrified and alone. It can happen to anyone, and every woman should prepare herself for it.” —Carolyn See, author of Making a Literary Life

“A harrowing cautionary tale that should be read by every woman who thinks romantic love can overcome all. I read this book in one terrifying gulp and plan to have my daughter read it. Every mother should do the same.” —Elsa Walsh, staff writer for The New Yorker and author of Divided Lives

“After a few moments of disbelief--how could a nice girl from a nice family marry such a cruel and dangerous man?--I found myself cheering for this woman who gets off the floor--literally--and goes on to save her own life. Crazy Love is a deeply affecting account of cruelty and abuse in a marriage doomed from the start. It is a reminder that while bad behavior can be explained it can never be excused, and that while placing blame is rarely useful, letting go is. Leslie Morgan Steiner's candor is wrenching and ultimately inspiring.” —Jane Juska, author of Unaccompanied Women and A Round-Heeled Woman

“Leslie Morgan Steiner has written a memoir that is as seductive as a whirlwind romance. This is a book for every woman -- and man -- who has ever felt, as Steiner writes, that ‘leaving was easy. The hard part was figuring out where to go.'” —Veronica Chambers, author, Mama's Girl

“Bright, beautiful and battered. Leslie Morgan Steiner didn't think of herself as a victim until it was almost too late. Hers is a success story that shows how excruciating a declaration of independence can be and how much happiness can come from it. Read it and cheer.” —George Lardner, author of The Stalking of Kristin and winner of the Pulitzer Prize for his Washington Post series investigating his daughter's murder by her ex-boyfriend

“Most love is crazy -- at first, it's that can't eat, can't sleep feeling. Then it moves into a comfortable, warm, hopefully, still sexy state. Leslie Morgan Steiner shows us with wrenching clarity when crazy is good and when crazy is something you need to leave. A must read for anyone in a consuming relationship.” —Iris Krasnow, author of New York Times bestseller, Surrendering to Marriage

“If you've ever read your daughter the story of Cinderella or Sleeping Beauty, you should make sure she knows the story Leslie Morgan Steiner tells in Crazy Love, too. This book is for every woman who's ever thought, "I can change him. He'll change for me"—and who hasn't thought that? Steiner's tale unfolds with all the harrowing inevitability of a horror movie, the kind where you watch the heroine start down the dark staircase to the basement with your heart pounding as you whisper, ‘No! Don't do it! Don't!’

That such a smart, kind, funny, vital woman could let herself be victimized this way seems almost unimaginable—and yet Steiner makes you understand how it came to pass, and even appreciate, with a sort of disgusted awe, how expertly her husband manipulates her aching insecurities and longing for that great big happily-ever-after love we learn about in fairy tales. That she comes out the other side is miraculous. That she's brave enough to tell this frank and brutal story is, too.” —Sandy Hingston, “Loco Parentis” columnist for Philadelphia Magazine and author of The Affair

“That such a smart, kind, funny, vital woman could let herself be victimized this way seems almost unimaginable--and yet Steiner makes you understand how it came to pass, and even appreciate, with a sort of disgusted awe, how expertly her husband manipulates her aching insecurities and longing for that great big happily-ever-after love we learn about in fairy tales. That she comes out the other side is miraculous. That she's brave enough to tell this frank and brutal story is, too. ” —Sandy Hingston, "Loco Parentis" columnist for Philadelphia Magazine and author of The Affair

“A vivid and compelling story that goes a long way to dispelling the myth that women who are abused by men are in some way at fault. This book will be cherished by any woman who has ever been in the grip of an abusive relationship.” —Jane Bernstein, author of Bereft:A Sister's Story and Rachel in the World

“Steiner's brave, insightful memoir reveals how independent and capable women can find themselves trapped in violent relationships. More important, she shows that women can find their way out of abusive relationships. Her absorbing story will inspire every reader. To a reader with an abusive partner, it may well save her life.” —Elisabeth Joy LaMotte, psychotherapist and author of Overcoming Your Parents' Divorce

“Leslie Morgan Steiner pulls no punches in this brutally honest memoir of a brave, smart, fresh-faced young woman's descent into domestic hell. Domestic violence isn't picky and it doesn't only happen to "other people." All of us are vulnerable. Her story is proof that love can come on so strong it can kill you. Steiner's good news? Sometimes the end of the world is actually the very beginning.” —Monica Holloway, author of Driving With Dead People and Cowboy and Wills

“Leslie Morgan Steiner is the bravest woman I know. Not only did she save her own life, but now she has --opened her heart to save countless others. As one who has hidden to avoid the humiliation of a fat lip, I know how hard that can be. Crazy Love recounts the sad, sentimental journey that destroys the myth of physical abuse - that it doesn't happen to nice girls, or smart girls, or anyone you know. Steiner's vivid prose paints a clear picture of how it started, why she let it continue, and how she escaped to tell the tale. Crazy Love sets the record straight: love can be a four letter word.” —Leslie Lehr, author of Wife Goes On

“I read this book in one night. Crazy Love is a gripping, beautifully crafted and above all a painfully honest account of a woman (who by all accounts doesn't look the type) grappling with an abusive relationship. If you've ever been there or heard about a woman dealing with this situation and wondered, "why'd she stay?" read Leslie's unselfconscious account. Now I understand. Read Crazy Love and you will too.” —Stefanie Wilder-Taylor, author of Sippy Cups Are Not for Chardonnay

“Leslie Morgan Steiner has written a deeply compelling, brutally honest and important book about her relationship with a man who abused her, emotionally and physically. I couldn't put it down. It's a must-read for anyone who has been there or knows someone who has -- or just wonders how it happens. Most importantly, Leslie's own life offers living, breathing proof that women can not only break these destructive bonds, but move on to build successful marriages, families and careers.” —Dee Dee Myers, author of Why Women Should Rule the World

Leslie Morgan Steiner, author of Crazy Love and editor of the highly acclaimed anthology Mommy Wars, writes the column "Two Cents on Working Motherhood" for the website Mommy Track'd: The Working Mother's Guide to Managed Chaos. She wrote the popular "On Balance" blog for washingtonpost.com from 2006-2008. She is a frequent national television and radio guest on NBC's Today Show, The Diane Rehm Show on National Public Radio, MSNBC, Fox News and other programs. Steiner holds a BA in English from Harvard College and is a successful corporate executive with 20 years of marketing experience at Leo Burnett, Johnson & Johnson and The Washington Post.  She lives with her husband and three children in D.C.
Loading...
or support indie stores by buying on