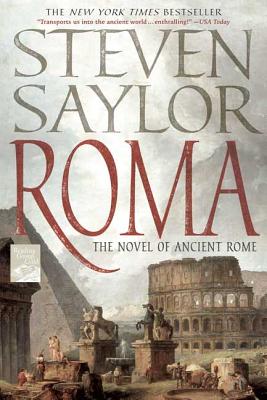 The Novel of Ancient Rome

Spanning a thousand years, and following the shifting fortunes of two families though the ages, this is the epic saga of Rome, the city and its people.
Weaving history, legend, and new archaeological discoveries into a spellbinding narrative, critically acclaimed novelist Steven Saylor gives new life to the drama of the city's first thousand years — from the founding of the city by the ill-fated twins Romulus and Remus, through Rome's astonishing ascent to become the capitol of the most powerful empire in history. Roma recounts the tragedy of the hero-traitor Coriolanus, the capture of the city by the Gauls, the invasion of Hannibal, the bitter political struggles of the patricians and plebeians, and the ultimate death of Rome's republic with the triumph, and assassination, of Julius Caesar.
Witnessing this history, and sometimes playing key roles, are the descendents of two of Rome's first families, the Potitius and Pinarius clans: One is the confidant of Romulus. One is born a slave and tempts a Vestal virgin to break her vows. One becomes a mass murderer. And one becomes the heir of Julius Caesar. Linking the generations is a
mysterious talisman as ancient as the city itself.
Epic in every sense of the word, Roma is a panoramic historical saga and Saylor's finest achievement to date.


Praise For Roma: The Novel of Ancient Rome…

“Roma resurrects the world's greatest city state, but also puts human flesh on the bones of history and installs a beating heart sizzling with passion. Fans of Steven Saylor will savor this novel; fans of ancient Rome will thrill to Saylor's in--depth understanding of Roman lifeways and be dazzled by the speed and sureness of the story . . . The shades of nobles, plebes, tribunes, and emperors past surely are united in giving him a thumbs up.” —Kilian Melloy, Edge (Boston)

“A modern master of historical fiction, Saylor has built his reputation on an ongoing series of ancient-world mysteries that have cumulatively and poignantly traced the collapse of the Roman republic. Now the well-regarded author stretches to even more epic goals for Roma. . . . In content and scope, Roma calls to mind James Michener's bestselling string of mammoth popular histories . . . In literary tone, however, and in its attempt to posit a plausible truth beneath Rome's well-worn myths, it invites comparison to such landmarks of the genre as Mary Renault's The King Must Die. Writing in a spare, elegant style shorn of excess description, Saylor convincingly transports us into the ancient world . . . What Saylor has produced is not just the history of Rome, but the history of history--of the way fact is buried by myth and of the way societies cling to traditions even when the meanings behind them are lost to memory . . . by the end, those stories have cohered into one, enthralling whole.” —USA Today

“Livy meets Michener in this sprawling, episodic 1000-year novel of the rise of ancient Rome from its first settlement to the assassination of Julius Caesar . . . Saylor's gift for dramatic narrative brings alive familiar tales from Roman history.” —Kirkus Reviews

“Author of the critically acclaimed Roma Sub Rosa series of historical mysteries, Saylor breaks out on an epic scale in this sprawling novel tracing Rome's extraordinary development over five centuries. . . . Solidly anchored in fact and vividly imagined, this long book moves at a sprightly clip and features some vibrant personages.” —Publishers Weekly

“Before the Roman Empire, there was the Roman Republic, and before that, what? If all you recall is Romulus and Remus, here is a more complete story of the founding of Rome, from 1000 B.C.E. to the much more familiar territory of Julius Caesar and his successor in 1 B.C.E. Many customs and legends lingering into the Empire era have their original explanation here, such as the sacred geese or the building of various temples. The city's fictionalized history is likewise full of original source material, which relates, the author notes, ‘uncannily familiar political struggles and partisan machinations.' Class warfare, nepotism, and moral and theological battles dogged the development of this often idealized Roman Republic, and a truly remarkable propensity for cruelty and merciless judgment foreshadows the later Empire. Unlike Saylor's popular mysteries, this work compares more to Edward Rutherfurd's London as it focuses on crucial incidents in the intervening centuries. Two families of ancient origin who pass an amulet onto the next generation provide continuity. This work will attract a different fan base from Saylor's other work but should prove appealing to history and political buffs who enjoy comparing our current events with ancient Rome.” —Mary K. Bird-Guilliams, Library Journal