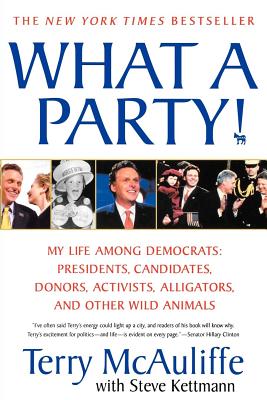 My Life Among Democrats: Presidents, Candidates, Donors, Activists, Alligators and Other Wild Animals

"I've often said Terry's energy could light up a city, and readers of his book will know why. Terry's excitement for politics—and life—is evident on every page."

"If you're in the market for a cautious, impartial, understated, pedantic—and boring!—look at American politics, put this book down right now. . ."

Terry McAuliffe has been at the epicenter of American politics for more than twenty-five years. Without question the most successful fundraiser in political history, his career started straight out of college with Jimmy Carter's reelection campaign in 1980, where he quickly became one of its chief fundraisers. His friends, former mentors, and close associates are a veritable Who's Who of Washington, including legendary Democrats like Tip O'Neill, Jimmy Carter, Dick Gephardt, Bill Clinton, Hillary Clinton, and Al Gore among many others. Terry is a forceful spokesman for his party, and has always maintained a reputation as a colorful, fun-loving character, respected even by his Republican adversaries.

What a Party! is a fascinating, hilarious, and provocative look at the life of one of Washington's legendary figures. From wrestling an alligator to running the Democratic National Committee to his friendship with President Clinton, Terry McAuliffe's wonderful memoir covers it all!

Praise for What A Party!:

"I thought I knew Terry McAuliffe as well as anyone, but this time he surprised even me. Who knew Terry could sit still long enough to give us a book this good? What a Party! is a must-read for all of us who love politics, believe in public service, and know that laughter is often the best survival strategy." —President Bill Clinton

"No one knows more about American politics than Terry McAuliffe. He gives us remarkable insights, and his accounts are both humorous and informative." —President Jimmy Carter

"A rollicking ride through the world of celebrity, fundraising and politics that certainly entertains." —The Washington Post

"Terry McAuliffe delights in this laugh-out-loud look at American politics." —The Miami Herald

"McAuliffe is one of the most colorful and successful true believers in Democratic politics, and, as Bill Clinton can attest, he's a heck of a lot of fun." —St. Petersburg Times (Florida)

TERRY MCAULIFFE served as Governor of Virginia from 2014 to 2018 and as Chair of the National Governors Association from 2016 to 2017. A former Chairman of the Democratic National Committee, from 2001 to 2005, McAuliffe’s first book, What A Party! (Thomas Dunne Books) hit #5 on the New York Times list and #1 on the Washington Post list.

Steve Kettmann has written for publications including The New York Times, The New Republic, and Salon.com. The author of One Day at Fenway, Steve cowrote the #1 New York Times bestseller Juiced with Jose Canseco.