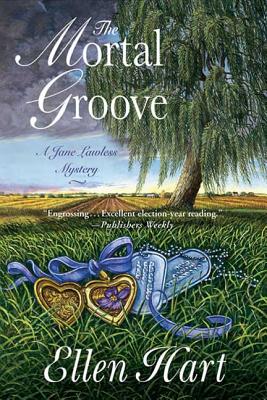 Minneapolis restaurateur and amateur sleuth Jane Lawless is in the middle of ringing in the New Year when the biggest financial backers in Minnesota politics break up the party with a backroom proposition for her father: How'd he like to be the state's next governor?

Flattered, Ray Lawless, a retired attorney, agrees to run, and the latecomer's sprint to the state capital is a huge success until reporters start digging. He and his family are fair game, but worse than that, so are the men running his campaign. Their secrets, involving the mysterious death of a young woman, have been buried since the summer they all came home from Vietnam. Unfortunately for Jane and her father, those secrets won't stay that way for long in Hart's ominous addition to her widely acclaimed mystery series.

“Hart offers another solid entry in her entertaining Jane Lawless mystery series… Loyalty, fairness, and the law are compellingly probed in this increasingly thoughtful series.” —Booklist on The Mortal Groove

“Hart is at the top of her game.” —Curve Magazine on The Mortal Groove

“Pitting sib against sib in a deadly game, the fourteenth Lawless mystery gets highly dramatic.” —Booklist on Night Vision

“Jane Lawless and her trusty sidekick, Cordelia Thorn, are the most refreshing, entertaining, and cerebrally stimulating duo since Rex Stout's unbeatable combo of Nero Wolfe and Archie Goodwin.” —Baltimore Alternative