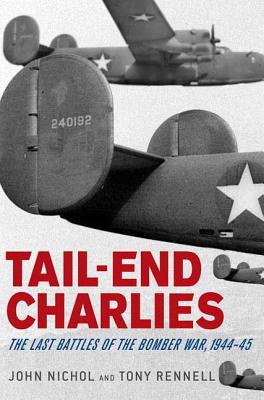 In Tail-End Charlies, John Nichol and Tony Rennell tell the astonishing and deeply moving story of the controversial last battles in the skies of Germany through the eyes of the forgotten heroes who fought them.

Night after night they stifled their fears and flew through flak and packs of enemy fighters to drop the bombs that would demolish the Third Reich. The airmen of the United States 8th Army Air Force American and British Bomber Command were among the greatest heroes of the Second World War, defying Hitler in the darkest early days of the war and taking the battle to the German homeland when no one else would.

Toward the end of the conflict, too, they continued to sacrifice their lives to shatter an enemy sworn never to surrender. Blasted out of the sky in an instant or bailing out from burning aircraft to drop helplessly into hostile hands, they would die in their tens of thousands to ensure the enemy's defeat. Especially vulnerable were the "tail-end Charlies"---for the Americans, which meant two things: the gunners who flew countless missions in a plexiglass bubble at the back of the bomber, and the last bomber in the formation who ended up flying through the most hell, and for the British, the rear-gunners who flew operations in a Plexiglas bubble at the back of the bomber.

John Nichol is a former RAF flight lieutenant whose Tornado bomber was shot down on a mission over Iraq during the first Gulf War in 1991. He was captured and became a prisoner of war. He is the bestselling co-author of Tornado Down and The Last Escape and the author of five novels. He is also a journalist and widely quoted military commentator.

Tony Rennell is the co-author of The Last Escape and many other books. He is a regular contributor to British newspapers and the former associate editor of The Sunday Times (London).
Loading...
or support indie stores by buying on