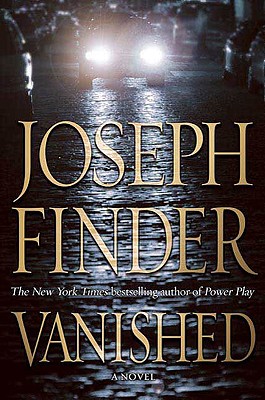 “Joseph Finder has created a fabulous new character, Nick Heller, who is ex-Special Forces with important contacts and brilliant deductive reasoning. Vanished is intelligent, intricate, and an outstanding beginning to what fans hope will be a long-running series.”
— Susan Wasson, Bookworks, Albuquerque, NM
View the List

Nick Heller is tough, smart, and stubborn.  And in his line of work, it's essential.  Trained in the Special Forces, Nick is a high-powered intelligence investigator--exposing secrets that powerful people would rather keep hidden.  He's a guy you don't want to mess with.  He's also the man you call when you need a problem fixed.

Desperate, with nowhere else to run, Nick's nephew, Gabe makes that call one night.  After being attacked in Georgetown, his mother, Lauren, lies in a coma, and his step-dad, Roger, Nick's brother, has vanished without a trace.

Nick and Roger have been on the outs since the arrest, trial, and conviction of their father, the notorious "fugitive financier," Victor Heller.  Where Nick strayed from the path, Roger followed their father's footsteps into the corporate world.  Now, as Nick searches for his brother, he's on a collision course with one of the most powerful corporations in the world--and they will stop at nothing to protect their secrets.

JOSEPH FINDER is the author of several critically acclaimed, bestselling thrillers including "Power Play "and "Killer Instinct." He lives in Boston, Massachusetts.

"Another triumphant work ... truly earns the distinction of 'page-turner.'  ...[will send] readers racing through the story at lightning speed ... A winner" -- Chicago Sun-Times on Power Play
"The pace gallops relentlessly ... Joseph Finder is perhaps the lead player in the corporate thriller genre" -- The New York Times Book Review on Power Play
"Juggling the dog-eat-dog ethics of corporate life with a tense, scary plot ... [a] nail biter of a read" -- Library Journal on Power Play
“Finder remains the CEO of the corporate thriller.” --Library Journal on Killer Instinct
"At long last someone has done for executives what John Grisham did for lawyers: create fictional ones sufficiently three-dimensional to care about... the book doesn't slow down for a second." --Fortune on Company Man