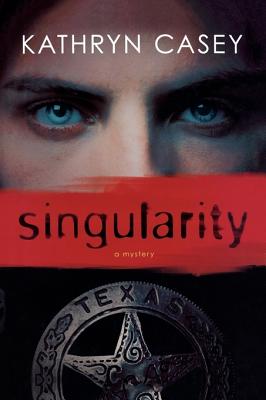 Profiler Sarah Armstrong knows what it’s like to be in a sticky situation. As a single mother and one of the few female Rangers in Texas history, she has had to work twice as hard to rank among the best cops in the Lone Star State. But when megawealthy businessman Edward Lucas III is found murdered along with his mistress, their bodies posed in grotesque ways, Sara quickly senses that this will be the deadliest case of her career. While others focus the investigation on Lucas’s estranged wife, Sarah disagrees and hunts a suspect only she believes in. Yet nothing in her career could have prepared her for the horror of a young man who believes he has been sent from heaven to massacre innocent people. When Sarah picks up on the killer’s elusive trail, following his scent all over Texas, the psychopath makes her his next target. And as Sarah closes in, the madman sets his sights on all she holds dear.  Singularity features a feisty, funny, and tough heroine and a truly creepy killer, as it races along to a chilling and unexpected climax.


Praise For Singularity: A Mystery…

“Speaking as a former cop, I’d work a case with Texas Ranger Sarah Armstrong any day. She’s a smart and savvy investigator, definitely a force to be reckoned with.  More important, Casey delivers a strong and chilling novel, proving that she can write fiction with the same compelling authority in which she pens true crime.”---Robin Burcell, author of Cold Case, Fatal Truth, and Deadly Legacy

“Singularity starts on a high note and never lets up.  Kudos to Kathryn Casey for her creation of Sarah Armstrong, a complex and memorable character sure to appeal to all readers.  Singularity is a bright new star in the mystery genre.”---Jessica Speart, author of Unsafe Harbor, Restless Water, and Border Prey

"An impressive fiction debut for truecrime author Casey, whose memorable heroine has brains, moxie, and heart. Happily for readers, this is the first in a series." --Booklist (starred review)

Kathryn Casey is a former magazine reporter and the author of five highly acclaimed true-crime books. She has been featured on "Oprah Winfrey, Nancy Grace, Montel Williams, " A&E, and Court TV, as well as in numerous radio interviews. She lives in Houston with her husband and their schnauzer, Max.
Loading...
or
Not Currently Available for Direct Purchase