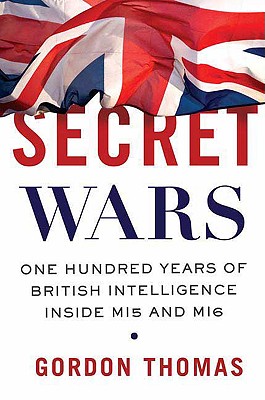 One Hundred Years of British Intelligence Inside MI5 and MI6

Gordon Thomas has established himself as a leading expert on the intelligence community. He returns here on the one hundredth anniversaries of Britain’s Security and Secret Intelligence Services to provide the definitive history of the famed MI5 and MI6.

These agencies rank as two of the oldest and most powerful in the world, and Thomas’s wide-sweeping history chronicles a century of both triumphs and failures.  He recounts the roles that British intelligence played in the Allied victory in World War II; the postwar treachery of Great Britain’s own agents; the defection of Soviet agents and the intricate process of “handling” them; the often frigid relationship that both agencies have had with the CIA, European spy services, and the Mossad; the cooperation between the British and Americans in the search for Osama bin Laden; and the ways in which MI5 and MI6 have fought biological warfare espionage and space terrorism.

All told, this is the story of two agencies led by men---and women---who are enigmatic, eccentric, and controversial, and who ruthlessly control their spies. Based on prodigious research and interviews with significant players from inside the British intelligence community, this is a rich and even delicious history packed with intrigue and information that only the author could have attained.

GORDON THOMAS is a bestselling author of forty books published worldwide, including many on the international intelligence community. His awards include the Citizens Commission for Human Rights Lifetime Achievement Award for Investigative Journalism, the Mark Twain Society Award for Reporting Excellence, and an Edgar Allan Poe Award for Investigation. He lives in London.

Praise For Secret Wars: One Hundred Years of British Intelligence Inside MI5 and MI6…

“Espionage buffs will love every page.”

“Literally impossible to put down.”

“A fascinating look at a spy organization that has remained off-limits to most journalists. The incredible episodes Thomas writes about seem like they belong in fiction, yet this is a first-rate account.”

“An anecdote-rich series of tales about the extraordinary derring-do of Israel’s vaunted elite foreign intelligence service.”