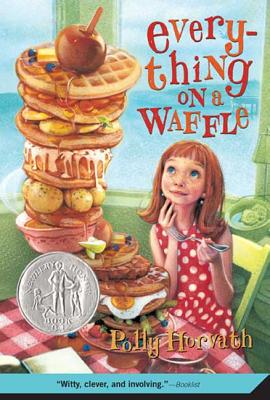 Polly Horvath's Everything on a Waffle tells the funny, bittersweet story of a young heroine who manages to hold onto hope despite the odds.

Primrose Squarp simply knows her parents did not perish at sea during a terrible storm, but try convincing the other residents of Coal Harbour on that score. For all practical purposes, at least for the time being, Primrose is an orphan, and there's no great clamoring of prospective adopters.

After realizing the impracticality of continuing to pay Miss Perfidy (a mothball-scented elderly lady) an hourly wage to baby-sit her, the town council is able to locate a relative, Uncle Jack, who reluctantly takes Primrose into his care. Primrose does warm up to living with him and in his home, despite the eerie noises resembling a hockey game that haunt her in the night. But true sanctuary can always be found at a restaurant called The Girl in the Swing, where everything—including lasagna—is served on a waffle, and where the proprietor, Miss Bowzer, offers a willing ear, as well as sage advice. Through a mixture of eccentric humor and probing philosophy, author Polly Horvath makes Primrose's search for peace and understanding a most memorable one.

Everything on a Waffle is a 2001 Boston Globe - Horn Book Award Honor Book for Fiction and Poetry and a 2002 Newbery Honor Book.


Praise For Everything on a Waffle…

“In [Horvath's] capable hands the dilemma of Primrose Squarp is revealed with hilarity and buoyant good nature. . . . Subtlety and slapstick is a challenging combination; Horvath pulls it off beautifully.” —The Horn Book Magazine, Starred Review

“Horvath delivers another hilariously puckish read with this tale of a (possibly) orphaned girl from a small Canadian fishing village. . . . A laugh-out-loud pleasure from beginning to triumphant end.” —Publishers Weekly, Starred Review

“The story is full of subtle humor and wisdom, presented through the eyes of a uniquely appealing young protagonist.” —School Library Journal

“Delightful. Hilarious. Entertaining. Insightful. These adjectives don't even begin to describe a novel I simply couldn't put down. . . . You'll love it.” —The Syracuse Post-Standard

Polly Horvath has written many books for children and young adults, among them Everything on a Waffle, The Canning Season, and One Year in Coal Harbour. She has won numerous awards including a National Book Award, Newbery Honor, Toronto Dominion Award, International White Raven, and Canadian Library Association's Young Adult Book of the Year. She has also been short-listed for Germany's most prestigious literature award, the Deutscher Jugendliteraturpreis, as well as the Writer's Trust Vicky Metcalfe Award for her body of work and many others. Her books have been New York Times and Publishers Weekly bestsellers and Rosie O'Donnell and Oprah picks. She is translated into over 25 languages and her books are taught in children's literature curricula in North America and internationally. She lives in British Columbia.
Loading...
or support indie stores by buying on