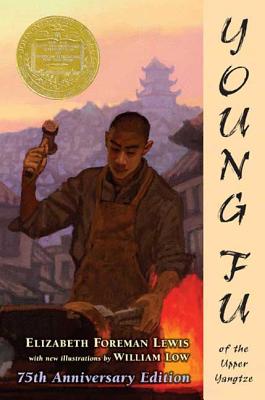 When Young Fu arrives with his mother in bustling 1920s Chungking, all he has seen of the world is the rural farming village where he has grown up. He knows nothing of city life. But the city, with its wonders and dangers, fascinates the 13-year-old boy, and he sets out to make the best of what it has to offer him.
First published in 1932, Young Fu of the Upper Yangtze was one of the earliest Newbery Medal winners. Although China has changed since that time, Young Fu's experiences are universal: making friends, making mistakes, and making one's way in the world.

Elizabeth Foreman Lewis (d. 1958) went to China in 1917 where she studied the Chinese language and history, and held teaching posts in Shanghai, Chungking, and Nanking. She is the author of Young Fu of the Upper Yangtze.

William Low is the author and illustrator of Chinatown and Old Penn Station, as well as a four-time Silver Medal winner at the Society of Illustrators.

Praise For Young Fu of the Upper Yangtze…

“It is a story full of adventure that I believe you will enjoy as much as I did. Young Fu won the Newbery Medal, not only because it was historically and culturally accurate, but because it was and is a really good read.” —Katherine Paterson, Newbery Award-winning author of Bridge to Terabithia and Jacob Have I Loved
or
Buy Here
Copyright © 2020 American Booksellers Association