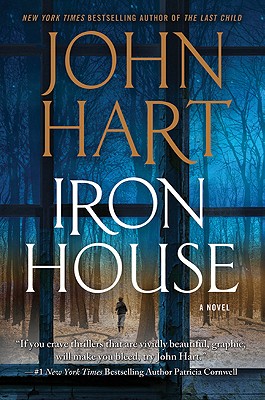 An old man is dying.

When the old man is dead they will come for him.

And they will come for her, to make him hurt.

HE WOULD GO TO HELL

At the Iron Mountain Home for Boys, there was nothing but time. Time to burn and time to kill, time for two young orphans to learn that life isn’t won without a fight. Julian survives only because his older brother, Michael, is fearless and fiercely protective. When tensions boil over and a boy is brutally killed, there is only one sacrifice left for Michael to make: He flees the orphanage and takes the blame with him.

TO KEEP HER SAFE

For two decades, Michael has been an enforcer in New York’s world of organized crime, a prince of the streets so widely feared he rarely has to kill anymore. But the life he’s fought to build unravels when he meets Elena, a beautiful innocent who teaches him the meaning and power of love. He wants a fresh start with her, the chance to start a family like the one he and Julian never had. But someone else is holding the strings. And escape is not that easy. . . .

GO TO HELL, AND COME BACK BURNING

The mob boss who gave Michael his blessing to begin anew is dying, and his son is intent on making Michael pay for his betrayal. Determined to protect the ones he loves, Michael spirits Elena—who knows nothing of his past crimes, or the peril he’s laid at her door— back to North Carolina, to the place he was born and the brother he lost so long ago. There, he will encounter a whole new level of danger, a thicket of deceit and violence that leads inexorably to the one place he’s been running from his whole life: Iron House.

John Hart is the author of three "New York Times" bestsellers, "The King of Lies," "Down River" and "The Last Child." The only author in history to win the best novel Edgar Award for consecutive novels, John has also won the Barry Award and England's Steel Dagger Award for best thriller of the year. His books have been translated into twenty-nine languages and can be found in over fifty countries. A former criminal defense attorney, John has also worked as a banker, stockbroker, and apprentice helicopter mechanic. A husband and father of two, he spends his time in North Carolina and Virginia.

"John Hart delivers another outstanding thriller... Secrets, lies and an abandoned former orphanage beckon the reader into a web of violence and emotion. Hart creates such vivid imagery, the reader sees the story slowly unfolding in full color. Iron House immerses the reader in a world that's haunting in its tone and power." --Associated Press

"Hart 2.0: bullet-fast and super gory, everything amplified and intensified...  Hart, again working in multiple voices and from a variety of perspectives, is somehow able to pull together all of the moving parts and to do the near impossible: to transform a bloody tale of murder and mayhem into something of a meditation - or, better yet, a fugue - on familial love. In so doing, he has taken a giant step forward as a writer, demonstrating yet again the impoverished imaginations of those who dismiss popular fiction and automatically relegate "genre writers" to the bargain basement of the house of literature." --Charlotte Observer

"The book combines suspense, a love story and plenty of twists and surprises.  The characters are vivid, and readers can feel the tension build.  Hart continues to write literate thrillers." --The Oklahoman

"It isn’t as if Hart’s career needed jump-starting. His first three stand-alone thrillers have been greeted by an ever-growing crescendo of praise, including two Edgar Awards. Definitely not the kind of writer who needs a breakthrough book. And, yet, Iron House lifts Hart to an altogether new level of excellence…. The present-time plot—disaffected Mob hit man on the run, trying to carve a new life without endangering those he loves—makes a superb thriller on its own (steadily building tension, magnificently choreographed fight scenes, including a High Noon–like finale), but it’s what Hart does with the backstory that gives the novel its beyond-genre depth. Like the great Peter Hoeg in Borderliners (1994), Hart uses the familiar story of mistreatment in an orphanage as a way into the inner lives of his characters, and the blind fear, abject confusion, and yearning for love he finds there are both heartbreaking and curiously hopeful, in an almost postapocalyptic way. An unforgettable novel from a master of popular fiction.” –Booklist, starred review

"This rich, impressive contemporary thriller from two-time Edgar-winner Hart (The Last Child) focuses on two brothers, Michael and Julian, both raised and abused at the Iron House of the title, an orphanage in the mountains of North Carolina.... Hart deftly interweaves a complex family history story with Stevan's intense, bloody quest for vengeance.... [The book's] powerful themes and its beautiful prose will delight Hart's fans--and should earn him many new ones." --Publishers Weekly, starred review

“Mr. Hart has really stepped things up a notch with Iron House...one of the most interesting and masterful pieces of suspenseful fiction that I have read.”—My Reading Room

“This is one of the best books I have read this summer!  It has a little something for every reader....  Romance, politics, mystery, an unpredictable plot line , suspense and lots of murder (warning: some scenes are very graphic)… In addition to the exciting plot, this is a story about the importance of family, the scars that remain from an unstable childhood and the struggle to overcome the past.” —The Book Blurb

“Iron House is…gut wrenching, and keep[s] you on the edge of your seat while your heart is beating in your throat.”—MPL’s Book Nook

“It is rare that I give a book a five out of five rating. I feel this one deserves it. Iron House is a hard charging thriller with lots of action and suspense. But it is also an intense psychological thriller, with deep characters that are both flawed and exceptional.” —Reading with Mo

“Hart builds a larger-than-life tale of love postponed, the loyalty of brothers, the sacrifice of blood, and the madness of those inured to violence as a solution.” –CurledUp.com

“Iron House is…as much about its rich cast of layered, authentic, and damaged characters as its captivating storyline. The author ramps up the helter-skelter thriller aspects without losing any of the layers and depth he’s already become famous for.”

“Put simply, Iron House is another terrific novel from Hart – the kind of crime thriller that many who don’t usually read crime or mystery would heartily enjoy. It’s as much about its rich cast of layered, authentic, and damaged characters as its captivating storyline. Hart exhibits some style as he vividly evokes not only the ‘Southern’ setting – in all its tarnished glory – but also aspects of the broader human condition. He shows that there can be plenty of thrills without having to resort to ‘world-changing’ plotlines, by simply focusing on matters that are life-and-death, spiritually or physically, for characters in their own small world.” —Crime Watch

“Excellent storytelling skills, suspense, and flashbacks make this well worth reading. Hart has brought to life the trials of childhood, of psychological damage, and the power of love and family to overcome it all.”—Reviewing the Evidence

“Iron House, a book that many critics and Hart fans are calling his best ever…is filled with…chaotic twists and turns, and scenes that will long stick in the minds of imaginative readers.”—Book Chase

Overwhelming Praise for the National Bestselling Work of John Hart:

THE LAST CHILD"A magnificent creation...Huck Finn channeled through Lord of the Flies." — THE WASHINGTON POST  "A rare accomplishment—a compelling, fast-paced thriller written with a masterful, literary touch." — Jeffery Deaver "If you haven't read John Hart...you ought to." — NEW YORK DAILY NEWS "This generation's Pat Conroy." — THE PROVIDENCE JOURNAL  DOWN RIVER"Settles the question of whether thrillers and mysteries can also be literature." — PUBLISHERS WEEKLY (starred review) "There are few books published that can legitimately be called a 'must-read,' but this is one of them." — CHICAGO SUN-TIMES "A beautifully constructed story of personal redemption, family secrets, and murder—a small-town epic...." — BOOKLIST  KING OF LIES"Grisham-style intrigue and Turow-style brooding." — THE NEW YORK TIMES "A top-notch debut, Hart's prose is like Raymond Chandler's, angular and hard." — ENTERTAINMENT WEEKLY (Grade A) "[An] ambitious debut thriller...a gripping performance." — PEOPLE
or
Not Currently Available for Direct Purchase
Copyright © 2020 American Booksellers Association