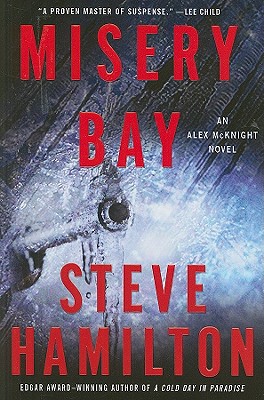 One of "The Boston Globe"'s Best Mysteries of 2011

ALEX MCKNIGHT IS BACK in the long-awaited return of one of crime fiction's most critically acclaimed series.

On a frozen January night, a young man loops one end of a long rope over the branch of a tree. The other end he ties around his neck. A snowmobiler will find him thirty-six hours later, his lifeless eyes staring out at the endless cold water of Lake Superior. It happens in a lonely corner of the Upper Peninsula, in a place they call Misery Bay.
Alex McKnight does not know this young man, and he won't even hear about the suicide until another cold night, two months later and 250 miles away, when the door to the Glasgow Inn opens and the last person Alex would ever expect to see comes walking in to ask for his help.
What seems like a simple quest to find a few answers will turn into a nightmare of sudden violence and bloody revenge, and a race against time to catch a ruthless killer. McKnight knows all about evil, of course, having faced down a madman who killed his partner and left a bullet next to his heart. Mobsters, drug dealers, hit men--he's seen them all, and they've taken away almost everything he's ever loved. But none of them could have ever prepared him for the darkness he's about to face.

"Misery Bay showcases Hamilton's dark vision and his talents as a sturdy plotter. ... Hamilton's view of the harsh, bleak landscape of winter in Michigan's Upper Peninsula will have readers grabbing their coats and gloves as the frigid air seems to seep through the pages. Misery Bay is like a visit with an old friend with whom you can't wait to catch up."--Sun-Sentinal "A triumphant return for McKnight. Misery Bay is as good as the previous ones in this critically acclaimed series. The plot is as suspenseful as they come, with lots of unpredictable twists and turns."--The Associated Press "Superb.... Assured prose, a thrilling plot, and a surprising, satisfying conclusion make this a winner."--Publishers Weekly (starred review) "Hamilton's prose is straight and clean, as devoid of pretense as the author's name — Steve, just Steve, with no accompanying initials. The book's complexity comes in Hamilton's gift for layers and the slow reveal."--Seattle Times "The best mystery novel I’ve read in a while."--John J. Miller, The National Review "I'm often asked to recommend a detective series readers might have missed.  This is it. Hamilton has been flying under the radar with his Alex McKnight series for too long. Misery Bay will change that, I hope."--Harlan Coben "This new entry in Hamilton's Alex McKnight series is one of his best. ... You'll not put this down willingly, and when you do, you'll still be thinking about it."--Romantic Times "Outstanding."--Yahoo! Shine "A solid, character- and conflict-driven procedural with one of his twistier plots."--The Boston Globe  "Hamilton is as good as anyone out there when it comes to fast-paced dark mysteries."--City Pulse

"A definite winner. ... Hamilton delivers with his latest, giving readers the adrenaline rush they need after a five-year wait."--Las Vegas Review-Journal

"A sheer pleasure to read."--Spinetingler Magazine

“Hamilton gives us mysteries within mysteries as well as a hero who simply won’t be beaten down.” —The Miami Herald


“Already one of our best writers.” —Laura Lippman

“Hamilton’s prose moves us smoothly along and his characters are marvelously real.” —Publishers Weekly


“Hamilton... paints a rich and vivid portrait of a world where the chill in the air is often matched by that of the soul.” —The Providence Journal


"I really like his main character, Alex McKnight, and I'm ready to re-visit Paradise, Michigan."--James Patterson on North of Nowhere

STEVE HAMILTON's first novel, "A Cold Day in Paradise, " won the Private Eye Writers of America/St. Martin's Press Best First Private Eye Novel Contest before becoming a "USA Today" Bestseller and winning both an Edgar and a Shamus Award for Best First Novel. His standalone novel "The Lock Artist" was named a "New York Times" Notable Book, was given an Alex Award by the American Library Association, and then went on to win the Edgar Award for Best Novel, making Steve Hamilton only the second author (after Ross Thomas) to win Edgars for both Best First Novel and Best Novel. He attended the University of Michigan, where he won the prestigious Hopwood Award for writing, and now he lives in Cottekill, New York with his wife and their two children.
Loading...
or
Not Currently Available for Direct Purchase