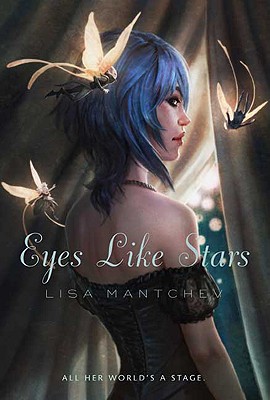 “This is one of the most inventive stories I have come across in a long time. Bertie lives in a theater where the casts of plays are real, bound by a magic book. This sweet and brilliant debut will have readers yearning for more.”
— Krys Tourtois, Schuler Books & Music, Lansing, MI
View the List

All her world's a stage.

Bertie Shakespeare Smith is not an actress, yet she lives in a theater.

She's not an orphan, but she has no parents.

She knows every part, but she has no lines of her own.

That is, until now.

NATE. Dashing pirate. Will do anything to protect Bertie.

Welcome to the Theatre Illuminata, where the actors of every play ever written can be found behind the curtain. They were born to play their parts, and are bound to the Theatre by The Book--an ancient and magical tome of scripts. Bertie is not one of them, but they are her family--and she is about to lose them all and the only home she has ever known.

Lisa Mantchev has written a debut novel that is dramatic, romantic, and witty, with an irresistible and irreverent cast of characters who are sure to enchant the audience.


Praise For Eyes Like Stars: Theatre Illuminata, Act I…

“All the world's truly a stage in Lisa Mantchev’s innovative tale, Eyes Like Stars. Magical stagecraft, unmanageable fairies, and a humourous cast of classical characters form the backdrop for this imaginative coming-of age.”—Suzanne Collins

“With an iron-willed girl hero whose magic is with words, and a universe that is also the ultimate theater, Eyes Like Stars  is the most unusual fantasy I’ve read this year! I recommend it to anyone who loves drama, strong girls, and rowdy faery folk!”—Tamora Pierce

“Bertie’s determined efforts to become invaluable form the basic plot in this wildly imagined adventure…Mantchev clearly knows theater from all angles, and she uses inventive play-within-play formats to create a tumble of multiple, even metaphysical narratives filled with delicious banter and familiar characters from the dramatic canon. Many teens, particularly those with some theatrical background, will look forward to the sequel suggested at the end of this bravely flamboyant and wholly original romp.”—Booklist

“Mantchev's first novel feels dreamlike…underneath is a solid story about the search for happiness and identity. Inside jokes will delight drama club devotees…but this passionate debut should attract a broader readership as well.”—Publishers Weekly

Lisa Mantchev is the author of the Theatre Illuminata series, including "Perchance to Dream" and "Eyes Like Stars." She grew up in the small Northern California town of Ukiah. She wrote her first play in the fourth grade, and has been involved in theater ever since. She received two scholarships to study drama at the University of California, Irvine. She won the Chancellor's Award For Undergraduate Research in Drama her senior year while studying in the Campuswide Honors Program. After graduation, she taught English at the Lycee Internationale de Los Angeles and created their Drama After School Program. In between report cards and drafting scripts for Winter and Spring productions, she wrote fiction. Her first professional short fiction sale was in 2002, and her debut trilogy sold in 2007. Mantchev makes her home on the Olympic Peninsula of Washington state with her husband Angel, her daughter Amelie and four hairy miscreant dogs. When not scribbling, she can be found on the beach, up a tree, making jam or repairing things with her trusty glue gun."
Loading...
or
Not Currently Available for Direct Purchase