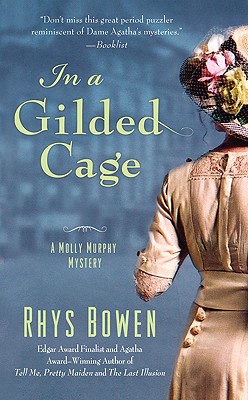 In a Gilded Cage

It’s Easter Sunday 1918, and Irish immigrant Molly Murphy has agreed to march down Fifth Avenue with the sign-wielding suffragettes from Vassar—a civil act of protest that lands her in jail. Molly’s betrothed, Police Captain Daniel Sullivan, manages to spring her from the clink, though his hands are full dealing with Chinese opium gangs. But as soon as she’s free, Molly marches straight into trouble again. Two of the Vassar alumni need Molly’s help as a private investigator. One believes her uncle is cheating her out of an inheritance; the other suspects her husband is cheating with other women. And when one of the clients dies—presumably from influenza, which is sweeping the city—Molly takes to the streets once more. Not to win the right for women to vote, but to reveal the wrongs of some very evil men…


Praise For In a Gilded Cage…

“Delightful…Bowen does a splendid job of capturing the flavor of early 20th-century New York and bringing to life its warm and human inhabitants.”
—Publishers Weekly

Rhys Bowen is the author of the award-winning Molly Murphy and Constable Evans mysteries. Her novels have garnered an impressive array of awards and nominations, including the Anthony award for her novel "For the Love of Mike" and the Agatha Award for "Murphy's Law." Her books have also won the Bruce Alexander Historical Award and the Herodotus Award, and have been shortlisted for the Edgar, the Agatha, the Macavity, the Barry, and the Mary Higgins Clark Award. She has also written "Her Royal Spyness," a series about a minor royal in 1930s England, and she is the author of several short stories, including the Anthony Award-winning "Doppelganger." Her story "Voodoo" was chosen to be part of the anthology of the best of 50 years of "Alfred Hitchcock Mystery Magazine." Ms. Bowen was born in Bath, England, and worked as an announcer and studio manager for the BBC in London, before moving to Australia and then California. It was here she started writing children's and young adult novels, and then moved on to mysteries with the Constable Evans novels. When not writing she loves to travel, sing, hike, play her Celtic harp, and entertain her grandchildren. She lives in San Rafael, California.
Loading...
or
Not Currently Available for Direct Purchase