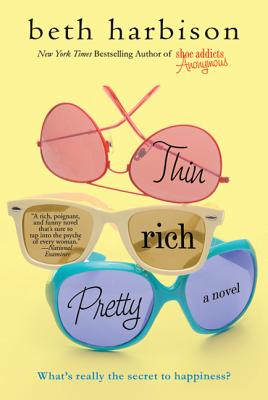 Twenty years ago, Holly and Nicola were the outsiders at summer camp. Holly, the plump one, was a dreamer who longed to be an artist. Nicola, the shy, plain one, wanted nothing more than to be beautiful. Their cabin nemesis was Lexi. Rich, spoiled, evil Lexi. One night, Holly and Nicola teamed up to pull one daring act of vengeance. But they never considered that this one act would have repercussions for decades.

Today Holly is a successful gallery owner who has put her own artistic dreams on hold. She still struggles with her weight and for approval from her overly critical boyfriend. Nicola is an almost-famous actress who believes that one little plastic surgery fix is just what she needs to put her over the edge into fame. And Lexi . . . Lexi is down on her luck and totally broke.

“This totally satisfying story allows you to understand the mean girl while watching the picked-on girls find happiness. You will feel for these women as they struggle with their current lives, which are always colored by their past. Good writing and humor add to this book.” —RT Book Reviews

Beth Harbison is the New York Times bestselling author of Secrets of a Shoe Addict, Shoe Addicts Anonymous, Hope in a Jar and Thin, Rich, Pretty. She is also a serious product junkie, with enough lip glosses, shampoos, conditioners, and foundations to lube every car on the streets of suburban D.C., where she lives with her husband, two children and dogs.
Loading...
or support indie stores by buying on