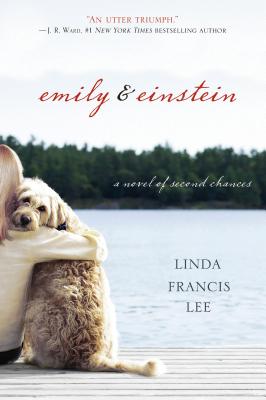 A man who doesn't deserve a second chance. A woman who finds one where she least expects it. And the lovable dog named Einstein who shows them the way…

Emily Portman is an up-and-coming New York City editor whose life is everything she imagined it would be. She has a job she loves and a beautiful Upper West Side apartment with her husband, Sandy. But everything changes in one night, when Sandy dies in a tragic accident, and Emily is stunned to discover that her marriage was made up of lies. Suddenly, she is forced on a journey to find out who her husband really was . . . all the while feeling that somehow he isn't really gone. Angry, hurt, and sometimes betrayed by loving memories of the man she lost, Emily's only comfort is a mysterious, scruffy dog named Einstein, who comes into her life at just the right moment – and stands by her side as she uncovers surprising truths about Sandy and her own family.

But is Einstein's seemingly odd determination that she save herself enough to make Emily confront her past? And when a new man arrives at her apartment, can she allow love through the door? Linda Francis Lee's Emily & Einstein is a heartwarming novel about truth, love, and second chances that has captivated readers and critics alike.


Praise For Emily & Einstein: A Novel of Second Chances…

“A rare book of emotional depth and observation - this multi-faceted story is woven by a master who holds you by the heart-strings on every page. An utter triumph all the way around, simply spectacular!” —J.R. Ward, #1 New York Times bestselling author of Lover Mine

“In this completely one-of-a kind story, Linda Francis Lee deftly combines fantasy and reality for an emotional punch that's unexpected as it is satisfying. You will HAVE to keep turning the pages.” —Patricia Gaffney, New York Times bestselling author of The Saving Graces

“Powerful and perceptive, Emily & Einstein is an unconventional love story, one of those rare books that illuminates the secrets we keep from the world . . . and sometimes ourselves. This is a heartfelt novel of hope, redemption, and second chances.” —Sarah Dunn, bestselling author of The Big Love

“Emily & Einstein is an extraordinary treat, a powerfully original novel about hope, redemption, and the possibility that love lives forever, written with grace and imagination. A gem that will stay with you long after the last page is turned.” —Joan Johnston, New York Times bestselling author of Shattered

“EMILY & EINSTEIN captured me from the first sentence. You'll find yourself glued to the couch and canceling your plans to find out Emily Portman's fate. Linda Francis Lee tells a story that leaves you begging for more. I loved it!” —Lisa Patton, Whistlin' Dixie in a Nor'easter

“A story you'll remember long after you turn the last page, from a writer who understands laughter, longing, and the power of second chances.” —Lisa Wingate, national bestselling author of Tending Roses and Never Say Never

“What Lee does best is get to the heart of the matter and make us care, all while making us laugh. I loved Emily and Einstein!” —Lian Dolan, the Satellite Sisters and Oprah.com

LINDA FRANCIS LEE is a native Texan now living on the Upper West Side of Manhattan, steps from the Dakota Apartment Building. Linda's writing career began in college when she published her first article. But after graduating she was sidetracked from writing when she was offered a job teaching probability and statistics. Later she found her way back to her first love, and the Atlanta Journal Constitution called her breakout novel, Blue Waltz, "absolutely stunning." Now the author of more than twenty books that are published in sixteen countries around the world, when Linda isn't writing she loves to run in Central Park and spend time with her husband, family, and friends.
or
Not Currently Available for Direct Purchase