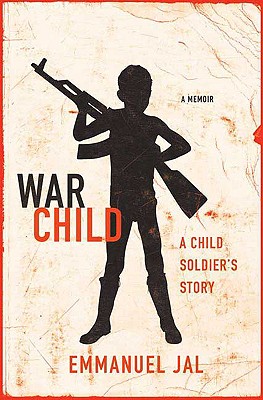 In the mid-1980s, Emmanuel Jal was a seven year old Sudanese boy, living in a small village with his parents, aunts, uncles, and siblings. But as Sudan's civil war moved closer--with the Islamic government seizing tribal lands for water, oil, and other resources--Jal's family moved again and again, seeking peace. Then, on one terrible day, Jal was separated from his mother, and later learned she had been killed; his father Simon rose to become a powerful commander in the Christian Sudanese Liberation Army, fighting for the freedom of Sudan. Soon, Jal was conscripted into that army, one of 10,000 child soldiers, and fought through two separate civil wars over nearly a decade.
But, remarkably, Jal survived, and his life began to change when he was adopted by a British aid worker. He began the journey that would lead him to change his name and to music: recording and releasing his own album, which produced the number one hip-hop single in Kenya, and from there went on to perform with Moby, Bono, Peter Gabriel, and other international music stars. Shocking, inspiring, and finally hopeful, "War Child "is a memoir by a unique young man, who is determined to tell his story and in so doing bring peace to his homeland.

"Disturbing and visceral...Jal tells his story in spare, direct, and searing prose that leaves nothing to the imagination and offers a close-up view of the damage done to the psyches of children turned into warriors." --Library Journal "Frank, unsparing...[A] searing portrait of a war-torn youth turned community advocate and role model."--Kirkus Reviews "Powerful...[an] intense personal story." --Booklist "There's no glamour here, no pitched battles, only unimaginable misery... Utterly grounded, specific and real... You'll come away from this book loving Emmanuel Jal."--Washington Post "Fast-paced...stark...a provocative challenge." --The New York Times

EMMANUEL JAL lives in London. His music has been featured in the movie "Blood Diamond," the documentary "God Grew Tired of Us," and in three episodes of "ER." He is a spokesman for Amnesty International and Oxfam, and has done work for Save the Children, UNICEF, World Food Programme, Christian Aid, and other charities, and has established his own charitable foundation, Gua Africa, to help former Sudanese child soldiers. He has been featured in "Time Magazine," "USA Today," the "Washington Post," Newsweek.com, and on NPR, CNN, Fox, MTV, and the BBC. A documentary about Jal's life, also called "War Child," premiered to acclaim at the February 2008 Berlin Film Festival and the April 2008 Tribeca Film Festival. His first U.S. album "War Child "was released in May 2008. Jal also plays one of the "lost boys" of Sudan in "The Good Lie," released in October 2014 starring Reese Witherspoon.
Loading...
or
Not Currently Available for Direct Purchase