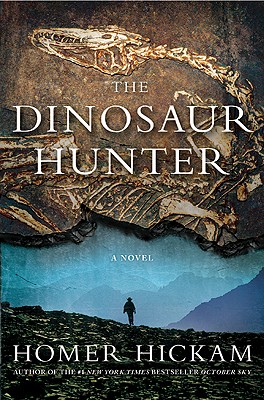 ""A" fascinating thriller, well crafted and relentless ... A cross between Tony Hillerman and Larry McMurtry, this is one hell of a good read."--Douglas Preston, author of "Tyrannosaur Canyon "and" Blasphemy"

The cowboys who work on the ranchlands of Montana expect more than their fair share of trouble. One of them is Mike Wire, a former homicide detective. Mike is about to learn murder and mayhem can happen under Motnana's big skies, too. Beneath the earth lie enough dinosaur fossils to fill several museum collections---and make a fortune for whoever claims them first. Soon he will have to combine everything he learned as a cop with everything he knows as a cowboy to protect the people and the land he could never live without.


Praise For The Dinosaur Hunter…

"The Dinosaur Hunter is a fascinating thriller, well crafted and relentless, about a murderer who stalks the peerless dinosaur bone-beds of a remote Montana ranch. A cross between Tony Hillerman and Larry McMurtry, this is one hell of a good read.”--Douglas Preston, author of Tyrannosaur Canyon and Blasphemy

“The Dinosaur Hunter reveals Hickam to be a combination of John Sandford and Michael Crichton, with a generous helping of Louis L’Amour thrown in for good measure.  It may not take a rocket scientist to write a novel, but Homer Hickam shows that this rocket scientist can spin a darned good yarn.”--Peter Larson, co-author of Rex Appeal and Bones Rock, co-editor of Tyrannosaurus rex, the Tyrant King

"Details of cattle ranching, paleontological fieldwork, and small-town life all combine to heighten the realism and suspense in Hickam's (Rocket Boys) latest book, which should appeal to lovers of mysteries and the West."--Library Journal "The rare novel that pits science against cowboy doggedness, getting both of them right."--Kirkus Reviews "Hickam not only knows his bones, he also knows how to tell a story, prompting readers to keep turning pages to answer that all-important question: "What happens next?"--The Charleston Gazette (West Virginia)

"The narrative style reads like an old Western."--The Oklahoman

"[Hickam] has captured the pioneering, individualist spirit of the ranchers and some of the people who... have left the stresses of the big city behind to live the quiet and very private life of the old West. ... The colorful descriptions of the activities on the dig and the fascinating history that continues to unfold as these gigantic fossils are unearthed are not only authentic and accurate, but fascinatingly woven into the story."--Book Reporter "Fun, and if you don't already live in Montana, it's a perfect escape."--The Washington Post  "A well-paced, first-rate read."--The Denver Post

When he's not writing bestsellers such as "Rocket Boys""/October Sky," Homer Hickam goes dinosaur hunting in Montana. His important finds include two Tyrannosaurus rexes and numerous other creatures of the Cretaceous Period. He lives in Huntsville, Alabama.
Loading...
or
Not Currently Available for Direct Purchase