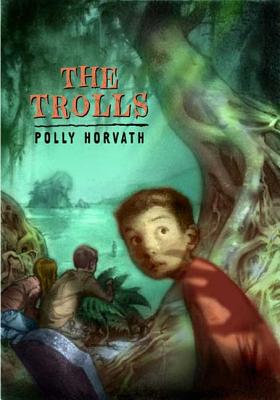 Aunt Sally is beyond any of Melissa, Amanda, and Pee Wee's expectations. She has come all the way from Vancouver Island, Canada, to take care of the children while their parents are away, and right from the start, Aunt Sally enchants them with tales of her childhood with their father. Odd characters figure largely in the stories, like Maud, a hunter rumored to have killed eighty cougars; Great-uncle Louis, a health nut who insists everyone should gnaw on sticks for extra fiber; and Fat Little Mean Girl, the star of a cautionary tale involving witchcraft and candy. All of Aunt Sally's reminiscences lead up to a crucial story about trolls, sinister creatures who supposedly lurked along the shore at night. The trolls had the power to change Aunt Sally's life forever, and their legacy may change the lives of the three present-day children as well.


Praise For The Trolls…

“An unconventional aunt blows in from Vancouver to pinch-hit as babysitter, and offers two sisters and their brother an entrancing view of family history . . . Most sections are . . . hilarious, as is the snappy and perfectly timed dialogue. After the last laugh, Aunt Sally's hard-won understanding of human nature will leave readers with plenty to ponder.” —Kirkus Reviews

“Horvath's dry humor runs like a current through the book, sweeping readers along in the breathless anticipation of the next bit of absurdity.” —Publishers Weekly

“Polly Horvath has produced a small gem. She knows just how to twist language to make readers sit up and take notice. . . . She draws her characters with such precision that they peak without ever going over the top.” —New York Times Book Review

Polly Horvath has written many books for children and young adults, among them Everything on a Waffle, The Canning Season, and One Year in Coal Harbour. She has won numerous awards including a National Book Award, Newbery Honor, Toronto Dominion Award, International White Raven, and Canadian Library Association's Young Adult Book of the Year. She has also been short-listed for Germany's most prestigious literature award, the Deutscher Jugendliteraturpreis, as well as the Writer's Trust Vicky Metcalfe Award for her body of work and many others. Her books have been New York Times and Publishers Weekly bestsellers and Rosie O'Donnell and Oprah picks. She is translated into over 25 languages and her books are taught in children's literature curricula in North America and internationally. She lives in British Columbia.
Loading...
or
Not Currently Available for Direct Purchase