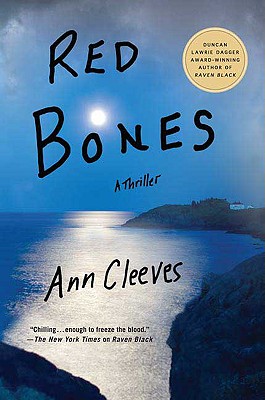 When a young archaeologist discovers a set of human remains, the locals are intrigued. Is it an ancient find—or a more contemporary mystery? Then an elderly woman is fatally shot and Ann Cleeves’s popular series detective Jimmy Perez is called in. As claustrophobic mists swirl around the island, Inspector Perez finds himself totally in the dark. This series is the basis for the hit BBC show Shetland, starring Douglas Henshall, which attracted over 12 million viewers in its first two nights on the air.

ANN CLEEVES is reader-in-residence for the Harrogate Crime Writing Festival, and was twice shortlisted for the CWA Dagger Award before winning the first Duncan Lawrie Dagger Award for "Raven Black." "Red Bones "is her third thriller set in the Shetland Island. She lives in Yorkshire, England.

Praise For Red Bones: A Thriller…

"Excellent...As in the best traditional English village whodunits, the killer lurks among the townspeople, but his or her identity still comes as a shock."--Publishers Weekly (Starred Review) "Cleeves is expert at depicting hardscrabble island life, parental expectations and disappointments and emotionally charged silences. Thoughtful readers should give Perez a try."--Kirkus Reviews "Cleeves' latest mystery is travel and entertainment rolled into one.... a suspenseful read."--RT Book Reviews "Moody and atmospheric ... well-written tale."--Library Journal

In Cleeves's excellent third Shetland Island thriller (after "White Nights"), Insp. Jimmy Perez investigates the shooting death of Mima Wilson, the grandmother of Perez's bumbling if well-meaning underling, Sandy Wilson. While some believe Sandy's cousin Ronald accidentally shot Mima late one night near her croft on Whalsay, a small Shetland island, Perez has his doubts. Mima's land is the site of an archeological excavation led by eager Ph.D. student Hattie James, who recently uncovered a skeleton of indeterminate origin. When another body turns up near the dig site, Perez becomes more suspicious, even though the second death is an apparent suicide. With Sandy's help, he begins to unravel a knot of tall tales and family betrayals that stretches back to a WWII resistance movement known as the Shetland Bus. As in the best traditional English village whodunits, the killer lurks among the townspeople, but his or her identity still comes as a shock. (Starred Review).
"(Sept.)" Copyright