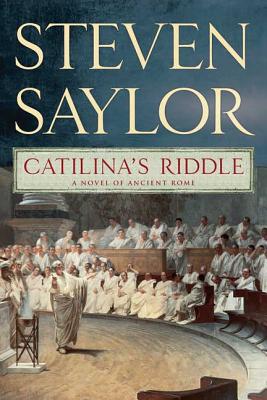 The third in Saylor's Roma Sub Rosa novels featuring Gordianus the Finder. Gordianus, disillusioned by the corruption of Rome circa 63 B.C., has fled the city with his family to live on a farm in the Etruscan countryside. But this bucolic life is disrupted by the machinations and murderous plots of two politicians: Roman consul Cicero, Gordianus's longtime patron, and populist senator Catilina, Cicero's political rival and a candidate to replace him in the annual elections for consul. Claiming that Catilina plans an uprising if he loses the race, Cicero asks Gordianus to keep a watchful eye on the radical. Although he distrusts both men, Gordianus is forced into the center of the power struggle when his six-year-old daughter Diana finds a headless corpse in their stable. Shrewdly depicting deadly political maneuverings, this addictive mystery also displays the author's firm grasp of history and human character.

On first publication back in 1994, Catilina's Riddle was a finalist for the Hammet Award.

“Saylor's fashionably inconclusive reading of the conspiracy throws both antagonists, Cicero and Catilina, into bold relief. The result is a spacious, provocative portrait of a fictional detective confronted with a historical mystery finally beyond his powers.” —Kirkus Reviews

“Saylor has written a sweeping and marvelously evocative story, with page after page of authentic detail and meticulous descriptions of the people, places, and politics of early Rome . . . There's no doubt that history buffs will savor the splendid historical detail.” —Booklist

“Saylor carefully plots this novel and accurately depicts Roman society; his attentive study of Roman history and culture is evident throughout. The characters are believable and well delineated.” —Library Journal