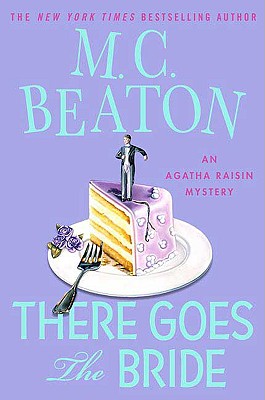 There Goes the Bride

James Lacey wandered over to the window of his hotel room. His fiancée, Felicity, was asleep. He was feeling some twinges of unease. What he loved about Felicity was the way she looked at him with her large eyes, appearing to drink in every word.

But on the plane journey, he wondered if she were listening to him. “The order to charge was given,” said James, “and a spaceship landed in the valley and some little green men got out.” “Fascinating,” breathed Felicity. “You weren’t listening!” “Just tired, darling. What were you saying?” James heard a commotion down below the hotel. He opened the window and leaned out. A woman had tripped and fallen getting into a cab. He only got a glimpse but he was suddenly sure the woman was Agatha. A familiar voice rose on the Crimean air, “Snakes and bastards!” Bossy, impulsive, yet hopelessly romantic, Agatha is dreading the upcoming marriage of her ex-husband, James Lacey. Although she has set her sights on a handsome and beguiling new Frenchman, she can’t quite stop obsessing about James. Her best intentions to move on with her life are put on hold when James’s young bride is shot to death just minutes before saying “I do,” and Agatha is named the prime suspect. Agatha’s sleuthing sidekick Toni stands ready to help find the real killer, but the case proves trickier than ever. Will her name be cleared, or has the outrageous Agatha finally had her last romp?

Praise For There Goes the Bride: An Agatha Raisin Mystery…

"Splendid."--Publishers Weekly "A riot. Fans, old and new, will be delighted."--RT Book Reviews "As a longtime fan of M. C. Beaton --- and Agatha Raisin in particular --- I have to say that THERE GOES THE BRIDE really is one of the most fun novels in the series. As always, there are the expected twists, turns and close calls as Agatha plunges ever forward to solve the crime. In addition, Beaton includes priceless moments regarding Agatha’s personal life --- laugh-out-loud
moments that only a character like Agatha can engender. Pick this one up now! You won’t be disappointed."--Bookreporter.com

M. C. BEATON, who was the British Guest of Honor at Bouchercon 2006, lives in the English Cotswolds and Paris. This is her 20th Agatha Raisin mystery.
Loading...
or
Not Currently Available for Direct Purchase