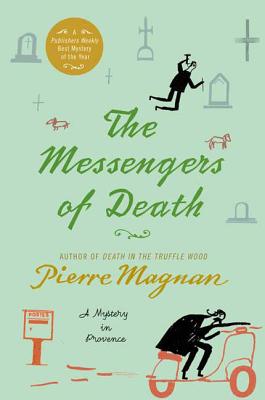 The Messengers of Death

A Publishers Weekly Best Mystery of 2008, this is the exceptional follow-up to Pierre Magnan's highly acclaimed Death in the Truffle Wood

Local handyman Emile discovers an envelope addressed to a Mlle Veronique in a disused mailbox. Being a former postman, he dutifully purchases a stamp and mails the letter. But when the body of this same Mlle Veronique is soon found murdered, Commissaire Laviolette is coaxed out of retirement to solve one of the most bizarre crimes imaginable.


Praise For The Messengers of Death: A Mystery in Provence (Commissaire Laviolette Mystery #2)…

“Stylish . . . a detective tale with a theme as old as Cain and Abel, as new as tomorrow's headlines, and as eternal as the Greek myths that inspire Magnan's fiction.” —Publishers Weekly (starred review) on The Messengers of Death

“A pleasantly old-fashioned mystery thriller with quirky charm aplenty.” —Kirkus Reviews on The Messengers of Death

“An intellectual feast . . . worthy of that other master of the French mystery, Georges Simenon. A winner.” —Richmond Times-Dispatch on Death in the Truffle Wood

“Delightful, old-fashioned . . . wrapped in the rich atmosphere of 1960s Provence. The setting will draw in Peter Mayle fans, even if they are not regular mystery readers.” —Booklist on The Messengers of Death

Pierre Magnan is an award-winning French crime writer. Death in the Truffle Wood was his first Commissaire Laviolette mystery to be published in the United States. He is also the author of The Messengers of Death and The Murdered House, published by Thomas Dunne Books/St. Martin's Minotaur.
Loading...
or support indie stores by buying on