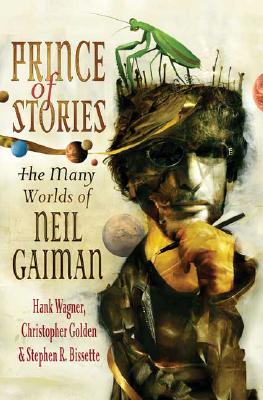 The Many Worlds of Neil Gaiman

“A bibliography, a biography, and a miscellany of Neil Gaiman and his work. For new readers or devotees, here's a host of background information and insights.”
— Brian Grover, Harry W. Schwartz Bookshop, Brookfield, WI
View the List

Over the past twenty years, Neil Gaiman has developed into the premier fantasist of his generation, achieving that rarest of combinations—unrivaled critical respect and extraordinary commercial success.  From the landmark comic book series The Sandman to novels such as the New York Times bestselling American Gods and Anansi Boys, from children’s literature like Coraline to screenplays for such films as Beowulf, Gaiman work has garnered him an enthusiastic and fiercely loyal, global following.  To comic book fans, he is Zeus in the pantheon of creative gods, having changed that industry forever.  For discerning readers, he bridges the vast gap that traditionally divides lovers of “literary” and “genre” fiction.  Gaiman is truly a pop culture phenomenon, an artist with a magic touch whose work has won almost universal acclaim.
Now, for the first time ever, Prince of Stories chronicles the history and impact of the complete works of Neil Gaiman in film, fiction, music, comic books, and beyond. Containing hours of exclusive interviews with Gaiman and conversations with his collaborators, as well as wonderful nuggets of his work such as the beginning of an unpublished novel, a rare comic and never-before-seen essay, this is a treasure trove of all things Gaiman. In addition to providing in depth information and commentary on Gaiman’s myriad works, the book also includes rare photographs, book covers, artwork, and related trivia and minutiae, making it both an insightful introduction to his work, and a true “must-have” for his ever growing legion of fans.


Praise For Prince of Stories: The Many Worlds of Neil Gaiman…

“This tribute is a tremendous gift to Neil Gaiman fans. . . . Well written, well organized, and fun to peruse.” —VOYA magazine

“There’s a lot to enjoy here, even for those who know only the corners of [Gaiman’s] tremendous oeuvre.” —Booklist

“Verdict: 8/10. An impressive and heartily researched tome on one of pop culture’s giants. A must for fans of the author in any of his mediums.” —Total Sci Fi

HANK WAGNER's reviews and interviews have appeared in" Mystery Scene, Cemetery Dance, Hellnotes, "and "The New York Review of Science Fiction. "Wagner is a co-author of "The Complete Stephen King Universe."

CHRISTOPHER GOLDEN is the award-winning, bestselling author of numerous novels, of which there are 8 million copies in print. His non-fiction work includes "The Complete Stephen King Universe "and "Buffy the Vampire Slayer: The Watcher's Guide."

STEPHEN R. BISSETTE is a cartoonist, writer, editor, and publisher. He is best-known for "Saga of the Swamp Thing, Taboo, '1963, ' Tyrant, " and co-creating John Constantine. Bissette also illustrates books and has authored fiction and non-fiction.
Loading...
or
Not Currently Available for Direct Purchase