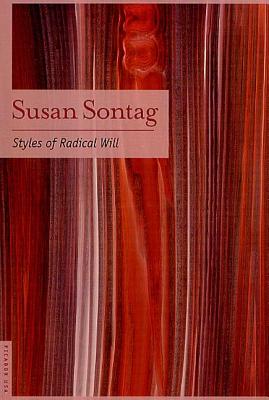 Styles of Radical Will

Styles of Radical Will, Susan Sontag's second collection of essays, extends the investigations she undertook in Against Interpretation with essays on film, literature, politics, and a groundbreaking study of pornography.


Praise For Styles of Radical Will…

“Susan Sontag's essays are great interpretations and even fulfillments of what is really going on.” —Carlos Fuentes

“[Susan Sontag] is one of the most interesting and valuable critics we possess, a writer from whom it's continually possible to learn.” —Richard Gilman, The New Republic

“She has come to symbolize the writer and thinker in many variations: as analyst, rhapsodist, and roving eye, as public scold and portable conscience.” —Time magazine

“Miss Sontag emerges from Styles of Radical Will . . . as an open and vulnerable intellect, a consciousness in process of transformation . . . Her first essay, 'The Aesthetics of Silence' is a brilliant and important account of Western tradition of artistic revolt against language, against thinking, against consciousness.” —Robert Sklar, The Nation

“It should be remembered that Miss Sontag has now written four of the most valuable intellectual documents of the past ten years: 'Against Interpretation,' 'Notes on Camp,' The Aesthetics of Silence,' and 'Trip to Hanoi.' In the world in which she's chosen to live, she continues to be the best there is.” —The New York Times Book Review

Susan Sontag was the author of four novels, including In America, which won the 2000 National Book Award for Fiction; a collection of stories; several plays; and seven works of nonfiction. She died in New York City on December 28, 2004.
Loading...
or support indie stores by buying on